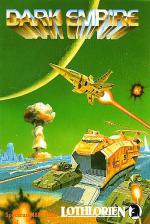 Many letters in FRONTLINE FORUM express an interest in fantasy wargames. These can bridge the reality gap, the feeling of dissociation from the subject matter which can alienate strategy garners from the historical setting of a real war.

And while a real war can never fit into the artificial constraints of a game, no matter how clever the system is, a fantasy war can be tailor-made for computer-gaming. So it can be a slicker piece of software.

Dark Empire certainly is. Its scenario doesn't make many concessions to realism, even fantasy realism. It's set long, long ago, on a planet far, far away... where there is a world which resembles a conglomeration of modern paranoid fears about totalitarian regimes.

The people of this planet think they're leading normal lives. The outside universe certainly thinks all is well there. But the population is controlled and manipulated by an 'evil alien force', the Dario Empire - and so successfully that the oppressed multitude couldn't communicate with the outside to ask for help, even if they were aware they needed it.

Despite this, for reasons not explored by Lothlorien, the Deep Space Authorities got to hear about it and dispatched a Liberation Task Force, presumably to impose their own benign rule on the planet.

The action takes place across the planet's continents and oceans. As usual in long-range wargaming, single units represent armies or fleets; and battles, instead of being played out in tactical detail, are fought on contact with enemy units.

There are two maps. One gives a large-scale overview of land masses, cities and deployment of units. The other zooms in closer. The landscape is totally blank, so terrain doesn't enter into Dark Empire, the style and speed of the gameplay would make such a refinement cumbersome anyway.

The presentation is immaculate. The front end of the game allows the player to load a previously saved game or create a new one. If you choose the latter option, the program leaves you waiting for minutes while it randomly generates a new set of continents. To reassure the impatient that there's still someone there, the game counts to itself. Sometimes the process is quite quick, and it only gets up to 300. Sometimes it goes above 1,000. I have no idea why. But this is certainly one way of creating suspense. Pressing a key brings up a detailed map with beautifully designed counters. The first thing to do is enter the break-in menu, which has an impressive range of options. As usual you can redefine the control keys, and you can also change the onscreen colours and after some elements of gameplay.

But beware: some apparently optional extras in this menu (like the display of your strength in units) seem rather essential, and you might find yourself playing a shorn version of the game without realising it.

And it's odd that you have to be into the game itself before you can start altering these parameters; still, you can juggle things about easily at any point.

The break-in menu also acts as a kind of unofficial pause mode, for Dark Empire Is played in real time. (The absurdity of imagining that armies and fleets can be moved around an entire world in real time is symptomatic of the game's artificiality.)

The object is simply to capture cities. Each continent is peppered with cities, some of them ports, and all are named; but this provides temporary atmosphere only. Because of the random regeneration of the world at the start of each game there's no point in mapping.

Discovering the map is part of the gameplay, in fact; you start out in possession of a single city, one army and a transport fleet, and can see only a tiny fragment of the surrounding land and sea. Moving units out into the unknown lights up the darkness, revealing new land masses, cities, and eventually enemy units.

When a city is under the player's control, it can join his war effort. Inland cities manufacture new army units, and ports can turn out naval units. There are no resource points to worry about, but it takes cities a while to round up an army or turn out a fleet - and time is the currency in this game. At the side of the map a counter ticks away the seconds, so nimbleness in manipulating the cumbersome movement system is important.

The units are controlled by icons. You can set an army trundling off in a specific direction, or tell it to make for a particular point. But the routine isn't intelligent enough to allow for corners and other obstructions, so guiding the units around the contours of the continents can become a wearisome catch-it-ifyou-can. And of course you can deal with only one unit at a time, so when the game really gets under way there can be over 50 units doing nothing in the meantime.

Though most of the important business takes place on land, there's only one type of land unit. In contrast there are five different naval units, including submarines, destroyers, and transports for ferrying army units. The transports have a well-defined function, and can carry up to three army units. But though there are probably interesting parameters at work under the surface, it's difficult to see how attacking with one kind of ship or another makes much difference.

And because there are virtually no statistics attached to the units - just a lame indicator of strength - there's no scope for intelligent decision-making. To capture cities, you have to throw one army unit after another upon them, in single file, till they fall.

It seems complicating factors like statistics have been excluded to keep the gameplay fast and simple, but we're left with a piece of software which looks more like a conventional cardboard-counters boardgame than anything I've seen recently - and yet plays nothing like it.

After taking over a few continents unopposed, you meet the enemy. The the game begins to degenerate into unplayability - there's simply too much going on at once fo the two-handed, single-brained player to cope with.

You can easily capture 25 cities or so before you meet the enemy, and if you set those cities on continuous production (from the break-in menu) they'll happily churn out more units than you could ever get to the front line.

But because the ships are so difficult to manoeuvre, the player is likely to find himself engaged in a war of attrition - the attrition of his nerves.

And that's the fundamental flaw of a game which looks very attractive at first. Even at the slowest speed (there are three to choose from) it's impossible to maintain more than superficial control. The graphic design is exemplary - smooth scrolling, nice-looking units and easily-accessed options. But the real-time element defeats the purpose, and though it's addictive at first, disillusionment and nervous tension soon take over.

There are some odd bugs too. For instance, the instructions mention aircraft and aircraft carriers, which don't appear in the game. Dark Empire is a slick piece of programming, but maybe it wasn't properly playtested.

This is too much of a hybrid game - interesting and impressive in some respects, but ultimately too unwieldy to be entertaining.

A slick piece of programming, but maybe it wasn't properly playtested. It's too much of a hybrid game - interesting and impressive in some respects, but ultimately too unwieldy to be entertaining.