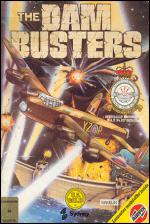 On loading Dambusters you are greeted by a beautiful picture of a Lancaster bomber on a runway. This standard of graphics prevails throughout the game. When it starts up you get a menu of options in order of difficulty - dam approach, English Channel onwards, or taking off from Scampton and flying the whole distance to Germany.

Taking off from Scampton is just like any other flight simulator, except that on a multi-engined bomber a lot of people have to work in cooperation with each other. Instead of plumbing for the easy option Sydney Developments has achieved perfectly the feel of all the people together in a bomber. This is done by switching between eight different screens. The pilot's screen is the one that looks most like a normal flight simulator, with a horizon and instruments, you can also see the night fighters, searchlights, flack, and barrage balloons. Engines are controlled from the engineer's station; there are rev counters, throttles, and fire extinguishers. The two gunner’s positions are like a normal arcade game, you control cross hairs and blast away with your machine guns at the searchlights, fighters, and barrage balloons.

The navigator's area is composed of a multi-screen map of Europe, you move around a cross with the joystick, this results in a line appearing on the compass in the cockpit. Fly towards that and you fly towards the cross.

> When you have finally got to the dam you can go onto the bomb aimer's screen. On this, you can turn on the famous spotlights and fine tune your height. You can then spin up the bomb and prepare to drop.

When the bomb is up to speed the front gunner's sights are replaced with the bomb sights. Line it up then drop the bomb.

When you make your attack run you have to be at just the right height (helped by the spotlights) and speed, then you have to fly at the right speed (more difficult). Then if you drop it at the right time you will be rewarded with some very nice graphics as the dam blows up.

> Overall, this is a very good game, though when you are under attack swopping between the screens can be a bit confusing. There are a number of shortfalls, including barrage balloons which occur at any height, Mel 09s when the text refers to Mel 10s and the engine noise still on with all engines out. But these aside I really liked the game.

There are a number of shortfalls, including barrage balloons which occur at any height, Mel 09s when the text refers to Mel 10s and the engine noise still on with all engines out. These aside, I really liked the game.