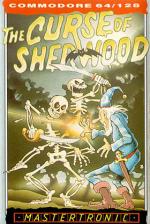 The peace and tranquility of Sherwood Forest has been shattered by the evil Sagalia and his cult, who have taken over and are ruling the place with terror and fear. In desperation the people of the wood turn for help to Robin Hood and his merry men.

To help the do-gooders, the Bishop of Derby has agreed to carry out an exorcism upon the fiend, and Friar Tuck, one of Robin's formidable team, travels to meet him. However, when Tuck reaches the meeting point he discovers the Bishop's corpse, pierced by a black arrow. Attached to its shaft is a parchment fragment, inscribed with a cryptic rhyme which has to be solved if the heart of the wickedness is to be found and finally destroyed.

The player guides the Friar around the flick-screen forest in search of items necessary to banish the diabolical Sagalia from the woody realm, clues to the required objects gleaned from the poem found stuck to the Bishop.

Sagalia's bizarre servants are encountered throughout the quest - these are dangerous creatures, endowed with the ability to steal one of Tuck's five lives at a touch. Friar Tuck is armed with a sword with which he can dispatch a beast, but as he kills opponents he can collect and utilise their fallen weapons, the power of each varying on the type of creature it's used on.

Tuck also has the ability to pick up objects which the enemy drop, a carried object being shown at the top of the screen, and these are the key to success. If the correct objects are picked up and dropped in the right places Tuck could well win the day, but it's by no means an easy task.

Take Sabre Wulf, Robin Of The Wood and more recently Firelord - if you're into this type of game then you'll be pleased to hear that Curse Of Sherwood is more of the same, with virtually identical playability and game structure.

Although the graphics are poor, there's a large map to explore and plenty of puzzles to solve - and it's cheap! However, if you like a little more variety, or are getting cheesed off with this type of game, then simply avoid it.

Following the abysmal ConQuest comes Derek Brewster's latest, and far superior game, The Curse Of Sherwood. We are again treated to Spectrum-like graphics, but they're adequate and don't really detract from the gameplay, which is actually quite captivating.

The puzzles are logical, involving a nice blend of exploring and blasting. Unfortunately the program isn't intelligent enough to remember how many creatures you have despatched on a screen, so if you kill three out of four, leave the screen and re-enter, there will again be four creatures blocking your way.

Although annoying, this is its only real fault and at two pounds, you can't really go too far wrong.

Sound 3%
A few forlorn white noises are all SID mutters.

Lastability 51%
Enough to keep a die-hard fan happy, but others less enthusiastic will quickly tire.

Value For Money 57%
Reasonable, but nothing new or outstanding on offer.

Initial exploring fun and reward... but nothing new or outstanding on offer.