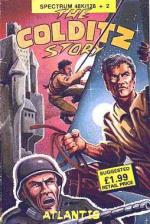 Rubbish! Cheat! Swizz! Sorry, I'm not referring to the game, just my fourteenth successive failure to get past the guards. Not that this is the the most enthralling game I've played recently, nor are the guards particularly difficult to get past.

The Colditz Story is a sort of arcade/adventure game where your task is (wait for it, wait for it), to escape from Colditz castle. You are presented with three windows, the first showing the available exits, the second what room you are in and the third showing commands, your inventory and also doubling as the action screen.

Pity about the action though. Certain rooms contain guards who must be crawled past (hard on the knees), shot (where did the gun come from?), dropped through trap doors (these inmates are certainly resourceful), or engaged in conversation (absolutely fab if you can sprechen sie Deutsch), and so on. Occasionally, to break the monotony, you can pick up objects in the vain hope you'll be able to work out what they're for, and some of the puzzles are difficult enough to keep the ol' grey matter awake (just).

But though The Colditz Story may be a little dull at times, it can be fun in an odd sort of way, and when you've died yet again, out goes the finger for "just one more game".

Fairly good graphics, a modicum of humour and semi-tough maze of puzzles make this game reasonably worth two quid. Just don't blame the escape committee if you're caught and shot!

Not the most gripping arcade/adventure in the known universe but you may still find it hard to escape!

Fairly good graphics, a modicum of humour and semi-tough maze of puzzles make this game reasonably worth two quid.