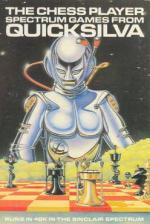 One of many Spectrum chess programs on the market, Quicksilva's version adds a new twist to the game with an impressive piece of synthisised speech and a personality, in the form of the Chess Player. This evil being has decided that the Earth's fate is to be decided by a game of chess between him and a human challenger.

The game opens with the Chess Player announcing himself very clearly through the Spectrum's beeper. You are then asked whether you are using a black and white or colour television, so that the most suitable colours for each can be set.

There are six levels of play, each with varying reply times. The Chess Player plays quite a respectable game on the level, although perhaps not as strong as some other chess games on the market.

Throughout the game the Chess Player displays his personality with such tactful remarks as "That was a' pathetic move" or "Do you know what you're doing?", and occasionally admits that "This is harder than I thought", "This is a good game" or "That was a good move" . Sometimes, though, his comments do not tie up with your actions.

Quicksilva has built itself a good reputation for high-quality software and The Chess Player does not let them down. The synthisised speech is impressive, and the graphics pleasant, making this a very nice game indeed.

The synthisised speech is impressive, and the graphics pleasant, making this a very nice game indeed.