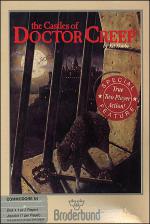 So, your company has transferred you to their Transylvanian office and you' re looking for a place to live? Something private, spacious and with a view? Well we have just the thing for you: welcome to The Castles of Doctor Creep!

This is quite an old game but a new import from Ariolasoft. The scenario has the hero desperately trying to escape from Doctor Creep's Castles after being trapped within. The castle rooms take the now familiar platform format, garnished with a variety of ghoulish nasties. To move between platforms you are supplied with ladders and sliding poles. The latter are one way so it's well worth looking before you leap, as it's very easy to become trapped.

Included in the package is a tutorial. The computer displays all the possible nasties you're likely to encounter and includes instructions on ttie best way of tackling them. Make a mistake after the computer has told you, and you are demoted back to the beginning of the tutorial.

Each castle needs to be loaded from cassette using a similar method to that of one of Ariolasoft's previous releases, Loderunner. When you have loaded the main program only the tutorial is present and the 13 different castles are held separately on the flip side. The castles all together make up a total of 200 rooms.

When starting, the map screen is displayed with an arrow pointing at the exit you are facing. Press fire and you travel through the passage at which the arrow points. At first the map only contains the screen you're set to move into, but as you explore the castle the map screen expands. Each room has several exits, colour coded in accordance to the map and the room to which it leads.

Nasties to look out for are Frankenstein's Monsters and Mummies. Both have different abilities and react and attack in different ways to your intrusion into their home. Walking past a mummy's sarcophagus causes him to awaken, whereupon he tries his best to catch you. His best isn't that good though, because he can't slide sown poles or climb ladders, making mummy dodging quite easy. Much more deadly is Frankenstein's Monster who can negotiate poles and ladders, the only way of unbolting him is to catch him under a lightning machine when you can throw the switch and it's goodbye Monster!

Other features include keys, trapdoors and teleportation booths, the latter allowing movement between various locations in a room. A room containing one also has a number of different coloured globes dotted about the screen. If you enter the booth and move the joystick down, the colour of the transporter changes. Press fire and you teleport to the globe of the same colour as the booth. The trapdoors are operated by levers placed about the room. Trouble is, the mummies and Monsters can also operate the levers, which can make things that bit more awkward, and you may well find yourself plummeting to a grisly death through a mummy-operated trap door.

Despite relatively unimpressive graphics, this adventure from Ariolasoft involves quite a lot of mindwork. The screens are complicated and fun to solve and the whole package is quite well presented, getting round the awkwardness of loading screens from tape well. The rooms are very detailed unlike many multiscreen games, each requiring plenty of thought before actually solving them. The tutorial is a great idea, apart from having to start from the beginning if you make a mistake. The different gameplay elements and vast array of rooms meant that The Castles of Dr. Creep held my interest for some time.

This was originally a disk-based game and consequently I found that having to load each part of the game from cassette was a real pain. The game itself seems rather dated when you look at the graphics and animation - your man looks like a stick insect and the castle lacks in colour (even though castles are usually grey anyway). For some arcade adventurers this may provide some fun, but for me there was definitely something lacking.

The Castles of Doctor Creep struck me as more of a glorified platform game than an arcade adventure. The many rooms are unimpressive to look at but there are some interesting puzzles to solve all the same. Both graphics and sound are weak, the former lacking in colour, definition and animation, and the latter being unimaginative and sparse. Although this is quite a good game, it is one that would benefit from being somewhat cheaper.

Graphics 52%
Poor sprites and average backdrops, both lacking in colour.

Sound 38%
Few sound effects but what is there is reasonably atmospheric.

Hookability 66%
Needs a lot of work to get into.

Value For Money 60%
The various 'pros' and 'cons' make it just above average.

Overall 65%
Good game if you like the type, but a bit dated.

Needs a lot of work to get into, but 200 rooms should keep the challenge constant.