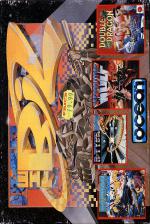 Ah, me! I love this time of year, don't you? Well, alright, I know it's a bit nippy and you're all firmly entrenched back in the routine of school, college, work (delete as appropriate), but I like it because of the large amount of good value compilations that always seem to appear. Ocean's got our biggies out at the moment, each a rip-roaring collection of games. This one's probably the pick of the bunch! It's called The Biz. And it jolly well is!

Ocean had already dipped into the Batman licence when this one appeared, with Ritman and Drummond's 3D isometric maze game. This was a corker and very favourably received in the YS office, despite it not being exactly true to the original. We felt it'd be a hard act to follow, but when the sequel arrived we weren't disappointed. Liverpool-based programming team Special FX had done the Caped Crusader proud, coming up with a slick arcade adventure whose two parts effectively measured up to separate games. No wonder it was Megagamed back in January '89. A Bird in The Hand was the easier of the two, in which Bats had to switch off a renegade computer in The Penguins hideout. A Fete Worse Than Death pitted him against The Joker and was considerably more tricky. If this has put you off in the past then the fact that the games have been extensively tipped in our very own Tipshop should make 'em even more attractive now. Rating: 92%

Double gasp!! Who'd have thought those clever Ocean bods could cram three Megagames into a box of this size??! Well, somehow they've managed it, 'cos here's Oppo Wolf, everyone's favourite mega-blast-'em-up coin-op conversion from December '88. Although the YS reviewers didn't quite agree, and it didn't enjoy the phenomenal sales success of Robocop, this was the game that you, the YS readers, overwhelmingly voted the best game of '88! What better pedigree could you ask for!? A horizontal scrolling shoot-'em-up, with a parade of enemy soldiers, vehicles and wotnot to blast away with your gun and grenades, it's sure to be remembered as a landmark in Speccy history. I must say however that this wouldn't have got my vote. Personally, I think such mindless shoot-'em-ups, no matter how well programmed, suffer from limited lastability. Still if you like this sort of thing then this is as good as you'll get. (Er... except maybe Operation Thunderbolt, of course!). Rating: 90%

Gasp! R-Type on compilation already!? It's such a classic I'd have thought there'd be loads of sales mileage in it yet! So if you don't haven already (and if not why not?) then this Megagame will entirety justify the cost of the compilation on its own! Often copied but, to my mind, never bettered, it has single-handedly set the standard by which all new shoot-'em-ups are judged, despite the fact that this game first saw the light of day back in January '89. It's one mean horizontal scroller, with skill colourful graphics and a host of evil adversaries who test your wits and your joystick skills to the limit. It's still got oodles of playability for me even now(!) so this review has given me a marvellous excuse to get hooked all over again. Oh, and this version contains the elusive eighth level too. Yep, when the game first appeared, Activision put Level Seven on twice instead! So now we've got the complete version that's one more reason why I can't recommend it too strongly! Rating: 98%

Ah... soooo... I knew it was too good to be true, and here's the duffer of the bunch. Not a particularly bad little kung fu beat-'em-up, but after the high standard of the previous games this one's a real anti-climax. Jonathan scored it eight out of ten actually, back in February '89, probably because he thought this five-level multiloader (even in 128K) was fairly innovative. It had simultaneous two player kung-fu-ing and enabled you to run up and down ladders and other features in the graphics, as well as picking up boxes and stuff to bung at your adversaries. But since then there's been a glut of this sort of thing, and, frankly, it's been bettered squillions of times (even by its own sequel Double Dragon II). Just another generally competent beat-'em-up. Rating: 70%

So there you have it - all in all a splendid value-for-money compilation. I can't help but award it a coveted YS Best Buy 'cos it's the best compilation around at the moment. My sole reservation is that all of these games were so big that I suspect a lot of you out there may have one, two, maybe even three of them already. If you haven't then you can't afford to miss it! If you have, then (in the immortal words of Graham on Blind Date,) "The choice ... is yours!"

The best compilation I've seen for blimmin' eons. If you don't have any of these games then this is a "must"!

The best compilation I've seen for blimmin' eons. If you don't have any of these games then this is a "must"!