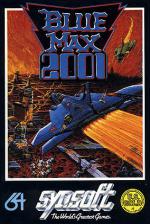 There's a lot of European and American imports just waiting to wing their way across to Britain. Are they all as good as they're cracked up to be? Julian Rignall scrutinizes some of the hoped-for releases to see if they're worth the wait.

The follow up to Blue Max must be one of the disappointing sequels of all time. Blue Max, for the few who haven't seen it, puts you in control of a WWI biplane with a mission to destroy enemy bridges, factories and airfields.

You start on an airfield and have to take off and fly over the diagonally scrolling landscape. Although it's a bit like Zaxxon, Blue Max appeared long before the aforementioned made its way to the C64. The graphics on Blue Max aren't too bad and as a game it's highly enjoyable.

Its follow up, Blue Max 2001, looks very similar from the word go. This time though, you have a flying saucer (that resembles a jelly mould) under your control. You start on an airfield, or should I say saucerfield, and have to fly over a barren landscape bombing buildings, bridges and factories. Now where have I heard that before?

The landscape still scrolls diagonally, but instead of scrolling from the right as in Blue Max it now scrolls from the left making it quite difficult to play. There are other saucers trundling about the screen which you're supposed to shoot but there's not much point in doing so as they offer little threat.

Control is very fiddly indeed and it took me quite a while to get going: joystick diagonals play an important part in the control and this always makes precision extremely difficult. The graphics are very poor, the craters on the landscape look ridiculously flat as if they are stuck on! The buildings and other constructions are poorly defined with the perspective all wonky. The sound is bad too, a feeble title screen tune and pathetic whistles and booms during the game.

It's a shame Synapse couldn't have made this a lot better, there was great potential for a follow-up to Blue Max and they've totally muffed it. Highly disappointing, and a game that won't even convince the Blue Max fanatics.

Crystal Castles appeared in British arcades last Easter and gathered quite a cult following. It's rather like a 3D Pacman with lots of extra features. You take the role of Bentley Bear, who has to run round the many weird constructions of Berthilda the Witch and collect the gems littering the floor by running over them.

The constructions themselves fill a whole screen and are true 3D with ramps and lifts connecting the different levels. You can run about everywhere and some screens contains hidden passages, walls you can run round and doorways which lead to hidden stairways which sometimes provide a quick route to a higher floor of the building.

Wandering around these buildings are Bethilda's evil minions. On just about every screen appear the Gem Gobblers who go round eating the gems. You can destroy these by running through them when they're in the process of digesting a gem. There are also sphereoids and trees which track you at extremely high speeds and follow your every move.

Acting as a timer are the bees. If you take too long on a screen they will form a swarm, drop from above and chase you. The longer you take, the more frequent their visits and the faster and more vicious they become. You can give yourself more time to finish the screen by collecting the honey pot, which will keep them away. There is also a magic hat which you can wear which makes you invincible for a few seconds and allows you to run through everything.

In this absolutely faultless conversion there are all the features of the arcade game. The screens and graphics are identical to its big brother and if you are any good at the arcade game then you'll be able to use all your tactics and patterns down to the last manoeuvre. All three secret warps are included and the game allows you to pick up from the level on which you just died.

I'm not sure when this will be released in Britain, but this is simple *the* finest arcade conversion for the C64 yet.

Stealth is one of the latest arcade game from Broderbund. Although being original in concept it struck me as being a cross between Buck Rogers and Pole Position.

The idea of the game is to race over the surface of a planet towards a tower. When you get there destroy it and you'll have to start again on a higher, more challenging level. There are hostile aliens protecting the tower and these try to destroy you as you zoom towards your target.

You start the game a certain distance from the tower and you have to fly towards it. This distance is represented on-screen by a counter which ticks down only when you are heading directly towards your target. You can move left and right so it is possible to keep on turning and end up moving away from it. The only trouble is that you've got a limited amount of energy with which to reach the tower and if you start straying off course you'll find the energy reaches zero before you have time to destroy the tower.

On your way tower-wards, you'll encounter several types of aliens, these being tanks, flying saucers, radar dishes and gun emplacements. Most of these fire at you very accurately and energy is lost for every shot that finds its target. There are also yellow energy and red anti-energy clusters which lie on the surface. If you go into an anti-energy cluster then you'll lose some energy but going into an energy cluster, which acts rather like fuel tanks, will add to your supply.

The graphics are of a very high quality, both crisp and fast with excellent 3D as you zoom towards the aliens. The only trouble is that in time it gets rather boring just zooming up to the same old tower time after time even though it's often difficult. Apart from that one gripe it's a nice game and well worth keeping your peepers peeled for.

Mr. Do's Castle was the mildly successful follow up to the arcade smash Mr Do. The game takes the character from the original game and puts him into a new and highly original scenario.

You are put onto the bottom of a platform-type screen. There's many levels to a screen, resulting in quite a maze of ladders and walkways. On the walkways are panels which you have to knock through the floor. To complete the screen simply knock all the panels through. Did I say simply? Oh, I forgot to mention the things which appear at the top of the screen when you start and which follow you. These track you rather well and pose a large problem, even on the lowest levels.

There are two ways of getting rid of them, wait until one walks underneath you and drop a panel on its head in Mr. Do fashion. The other way is to knock down the three special panels which will give you a key. Go to the top of the screen where the baddies emerge and unlock the door. This will send them running away in terror as they are now vulnerable to your hammer, so run after them and give them one good bonking. If you manage to kill all the baddies then you'll automatically go to the next screen.

The graphics and sound are identical to the arcade game and the same itself is a tough and challenging one, I enjoyed playing it and it makes an ideal follow-on to Mr. Do.

The infamous Strip Poker has now been extended and slightly rewritten. Featuring two new girls, Miranda and Candy, the game is both fun and, arguably, controversial.

You play poker against a computer female and the idea is to strip her naked by winning all her money. It goes without saying, that if you're playing honestly, then the reverse should also happen! You both start with [] and are deal the usual five card poker hand. The computer girl plays a reasonable game and all the rules of poker apply. You can raise, drop or call and have a $25 maximum bet (the minimum bet is $5. When you play you have to win the $100 from the girl. If you do then she'll be forced to sell an item of her clothing for another $100. The game works likewise for you, and the deeper you get into debt the harder it is to win.

The graphics are very good indeed, using digitised pictures to try to get the characters looking lifelike. It's great fun to play, and some of the comments printed on-screen are very humorous. There's a facility for allowing new girls to be loaded if you get bored with the two provided. If you like Strip Poker and feel like a change then I suppose this would be something to look forward to, otherwise it's just a novelty which provides an amusing hour or so. 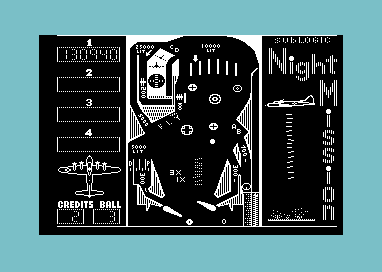 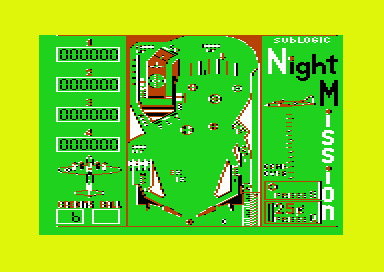 Night Mission Pinball is simply the best pinball simulation for the C64. Copied from the pin table of the same name using the brilliant Pinball Construction Set, Night Mission offers an exciting and extremely addictive game.

The theme of the table is of a night time bomber on a bombing mission. Throughout the game there is the drone of its engines, the sound of black and anti-aircraft guns being fired and bombs falling and exploding. The table itself is a lively one, with plenty of drop targets and ball slots, and you need quite abit of skill to get the ball into some of these. The scoring is complicated with heaps of special bonuses, extra credits and balls and 3x/5x scoring bonuses. You can also tilt the table left or rgiht so you can jobble the ball away from the exit drop slot. You have to be careful though, too much joggling and you will get a 'tilt' and lose the ball and all the bonus points obtained during its use.

When you start the game you are able to set the strength of the spring, ranging from really soft to a superfast release. Once the ball is released the game plays exactly like a pin table. The ball behaves exactly like a real one and spangs about the table so fast that it takes all your concentration to follow it. When the ball moves extremely fast you get a 'strobe' effect and it looks like there are several balls following each other at a very high speed. The graphics and sound are excellent and the game itself is one that I had great problems in putting down once I'd started playing.