﻿ The Axe Of Kolt (FSF Adventures) Review | Your Sinclair - Everygamegoing 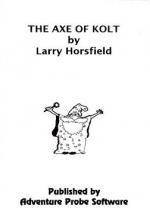 I thought FSF's first adventure, Magnetic Moon, was quite good. I thought the second, Starship Quest, was better. Now the latest release, The Axe Of Kolt, has zoomed into the coveted Megagame bracket by fulfilling all the promise of those earlier titles.

In theory you should get better at adventures the more you write, but not everyone's able to do that. The author of FSF games, Larry Horsfield, certainly does, working harder each time to produce a polished product full of features and without glitch or hitch. Full marks, too, for supporting all Spectrums, as he's now added the +3 to his armoury, and it's that version I've played here. Of course, not all the features will appear in the smaller memory machines, but since I've seen more than my fair share of games in all three versions in the past I can safely say that 48K owners needn't be put off - Larry often makes it look like you're playing a disk-based adventure anyway!

Axe is a four-part game, and massive with it, boasting the bonus of a £50-first-prize competition. An entry form comes with every game, and since the closing date isn't until 31st May 1991, there's plenty of time for everyone around the world to enter.

You take the role of Alaric Blackmoon, once a swordsman and mercenary, but now in enforced retirement as you no longer have a sword. You're also penniless, so a bit of paid pillaging wouldn't go amiss. One cold November day, you turn up in Hengemire, just another stop on your journeys from village to village, living off the land, earning a bit of food and B&B by doing the odd job here and there. Except, of course, that in Hengemire all that's going to change (surprise, surprise).

The screen is neatly laid-out, and the versatile PAW has once again been used to good effect. IT and ALL commands are understood, and much use is made of speech commands to interact with the many other characters that people the adventure. Not only can you TALK TO other people, you can also SAY something direct to them (like SAY TO LORNA, "DROP THE HAGGIS"). Furthermore, you can ASK LORNA ABOUT THE AXE or convey information too - TELL LORNA ABOUT THE BEDBUGS. If you die in the game you're given a resurrection option, which restores you to your last RAMSAVEd position. Other little helpful features are VOCAB (a list of many useful verbs and other commands) and INFO (a list of one or two letter abbreviations for certain common inputs). Then there's HELP, which gives you a telephone helpline number.

From the start I made a couple of moves and with the experience of years of adventuring behind me immediately found myself outside the Dragonslayer's Arms. The bad news was that it was shut, so I wandered off again, found myself a clapper without a bell and returned to the pub just in time to give the landlord a helping hand. This earned me a bed for the night, a meal and all the ale I could sup. This is the life!

I examined a few things in the pub (like the landlord's wife!), and before very long a stranger turned up and the story unfolded which set me off on my quest for the Axe of Kolt. You may think it's a long time getting started, but the village is convincingly created, there's lots going on, people wandering around, signs to read, and it's much better than an opening screen that merely says "Your quest is to find the Axe of Kolt. Off you go..."

This thoroughness applies throughout the game (at least in the first two parts which I managed to look at). For once the interaction with other characters has come off, and this too adds to the atmosphere and makes you believe in the whole thing, which is definitely the sign of a good adventure. Usually, speech is limited to SAY "HELLO", and even that's clumsily done. Here it works effectively, provided you jot down the names you come across, like Kolt, Xixon, Dwarks and so on. Someone, somewhere, has information about them, and, just as in real life, you have to ask a variety of people before you get the right answer.

I also like the fact that co-operation is mainly the way to succeed in this game. In need of some wood part-way into it, I just went and asked the likeliest source and he actually gave me some, just when I was expecting him to send me off in search of a new saw or a gold coin or something. Mind you, it's not all love and peace (man) - there's a fair bit of chopping heads off too, but not enough to put off the people who don't like that approach to adventuring. Yup, it really is a game for everyone.

I did try to find something to moan about - a bad spelling, silly solution to a problem - but in the end I gave up looking. It'd be petty to ask for graphics, but if there were pretty pix you'd have to chop some of that background stuff that makes the game so convincing. So, if you want to be convinced - buy it!

This really is a game for everyone. I did try to find something to moan about - a bad spelling, silly solution to a problem - but in the end I gave up looking.