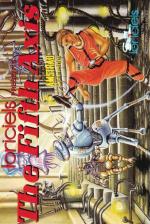 The 5th Axis is the first in a range of programs which will be appearing under the Activision label from France. A company called Loriciels write the programs, and Activision produce them. If the first offering is anything to go by, it should be a very productive partnership.

The setting is the future; 15th September 2410 to be precise. For some reason, you're the only person who can save the world from disaster. The culprit for this sticky situation is Professor Chronos. He was beavering away on his new invention, a time machine, when suddenly "Kerzumph!" it disintegrated. Now, screwing around with time is far from sensible. Bits of time machine were scattered through time, and artifacts from other time zones were also moved around.

Your mission is to traverse the galaxy, returning the objects to their correct time.

Once the game has loaded you can set up the various attributes of your character. Force, Agility, Life and Credit can all be altered.

The first thing that you'll notice when you start playing (apart, perhaps, from the "catchy" tune) is the way the graphics operate. Your character remains in the middle of the screen, with the background scrolling around him. The layout of the early stages of the game looks a little like a standard "run and jump" game.

Almost as soon as you appear on the screen, you'll be surrounded by a horde of ghastly-looking creatures, which will proceed to beat the living daylights out of you without so much as an "excuse me"!

The combat is very well staged. You can perform flying kicks and punches, as well as a stand-up fight.

Gameplay is slick and fast. You can get the hang of the program quite quickly, and it's possible to save the game after a particularly successful mission.

Gameplay is slick and fast. You can get the hang of the program quite quickly, and it's possible to save the game after a particularly successful mission.