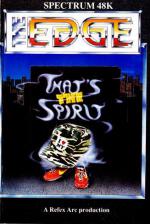 This arrived at the Gamer offices about thirty seconds before our final deadline, so we didn't have time to get a long way into it before the men in white coats came to take us all away 'til next issue's reviews have been done.

Fortunately, the game has a turbo loader that's quite quick, so I got a reasonable look at it, enough to grab my attention and ensure that I'll go back and give it a good going over as soon as I can.

Imagine a game that is an animated adventure (like Valhalla, but with better graphics), uses a variety of single key commands and a keyboard overlay (like Lords Of Midnight) and has an icon system for manipulating objects (like A View To A Kill) and you've more or less got 'spirit'.

The introduction on the inlay is a bit weird. It seems the game is set in 1996, a time when all the cities in the world have been renamed New York, and the 'second prohibition' has been declared, banning all spirits. Now I thought that meant booze type spirits until I read the note about the ghost detector device, and saw the spooks on the screen indulge in a bit of GBH on my little man. However, the inlay notes don't give anything away, so you're on your own when it comes to figuring out your goal.

The graphics are very good. Your man walks along the streets of New York, passing various building, and objects that are needed to solve the puzzles are encounter. The icon system allows you to join objects together, to make tools that you may need, and the keyboard controls offer options such as 'Hold', 'Take', 'Examine', 'Throw' and so on. There's even a 'Swear' option, which, needless to say, I used at the first available opportunity, only to get a bit of a shock in return!

I didn't have time to explore very far, so I'm not sure how large the playing area is, but as long as it's fairly large I'm pretty sure that the game will have sufficient content to keep me at it for quite some time. Despite the brief time I had to review it in, That's The Spirit was one of those games that seemed to grab my attention immediately. After all, there are lots of games that can be reviewed in just a few minutes due to their lack of content, but that certainly doesn't seem to be the case with That's The Spirit.

One of those games that seemed to grab my attention immediately.