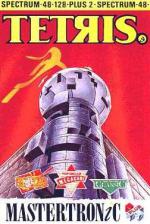 Yahay (Now this is what I call a game! This, as you may remember, was Mirrorsoft's 'Russian' game. 'The first ever game from Russia,' the hoardings screamed, or words to that effect. 'And the three bears,' thought I, but my doubts were soon silenced by the sheer brilliance of the game itself.

For Tetris is computer gaming at its very best. You have what looks like a beaker, and strange shapes drop from above at speed that vary according to the difficulty level and also to how far you've got in the game. You can manipulate the shapes as they fall to fit into ones that have already landed, and the idea is to fit them together as efficiently as possible, leaving no space unfilled if you can manage it.

The reason? Well, the beaker and the shapes are arranged in a fairly simple grid system, and every horizontal line of this grid which you fill completely disappears. It sounds complicated but in fact it's strikingly straightforward - and fiendishly tricky. Better still, the Spectrum version is just about the best one available - don't ask me why. but it's smoother and more playable than even the spanky 16-bit version. Like 720°, Tetris still merits the ultimate YS award, so here goes with probably my highest ever mark for anything...

The Spectrum version of Tetris is just about the best one available - don't ask me why, but it's smoother and more playable than even the spanky 16-bit version!