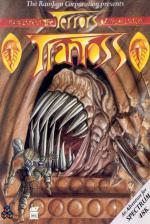 The Terrors of Trantoss | Overall Summary

Those of you who managed to survive the assassin's bullets in Ram Jam's previous effort, the excellent Valkyrie 17 should be pleased with their latest, Terrors of Trantoss.

The game, marketed by Ariolasoft, has been written with Ram Jam's own adventure generator, the BIRO Mk2, and has a 'traditional' setting - the world of heroic fantasy and magic.

The story goes thus ... Trantoss, archmage and evildoer, was defeated long ago and his magic mace fractured and hidden. As is usual with these crafty warlocks, Trantoss has somehow managed to resurrect himself and the Mountains of Mortran rumble again with his power. Whilst all good folk quail in terror, two brothers decide to rid the world of Trantoss once and for all and meet in the village of Hapsal to begin their quest.

Lobo is a hefty sort of bloke, well able to swing a good punch or cart around a sack of sea-coal. Scarn is slim and tall - he may not be as strong as his brother but he can wriggle his way into places where Lobo would just get stuck. Put together, they make a good adventuring team.

They'll either operate as a unit and travel together, saving you the need to give separate movement instructions to each or you can send each brother to different locations to achieve different aims. If they are apart you can swap between them following their action at different places. Colour coding on the small pictures of our heroes shows who you're currently controlling.

The location graphics are fairly classy and, unusually, take up the left-hand side of the screen. They draw so rapidly that they don't interfere with the game in any way and they're also interactive - that is, they'll often show the results of your actions. If you open a cupboard you'll get a new picture showing the open door; if you bridge a stream the planks you use will be shown. There's a picture for every location but, despite that, there are over 130 locations and a very complex set of problems.

The quest gets off at a leisurely pace with the collection of useful items for the journey - as usual in these situations you'll have to agonise over what you're going to leave behind.

The brothers buy the services of a guide to take them through the trackless paths of the Forest of Grondin. Magic rears its enigmatic head almost immediately with the discovery of a Wizard's Staff. Inscribed on it are strange runes. Symbols of the same type are found in a number of places and you're going to have to puzzle out their meaning quite quickly if you want to progress very far.

All amateur cryptologists will probably put in a lot of effort at breaking the code - let me warn you that the solution is a simpler than you think!

Provided you solve the mystery of the runes you can explore a wide region of countryside. Once past the ferryman you head up into the mountains where there are caverns, vaults and more magical objects. Several tough mazes to negotiate and other characters, like robbers and mountain men. to help or hinder you. You aren't forced along one route and can easily wander around in quite a broad landscape.

In fact, for many of the problems you'll need to perform complicated tasks involving numbers of objects and considerable exploration to discover those you require. For instance, at one point, the mountain mens' blacksmith needs some steel - you know that you might get a bow in payment if you can bring him some. Off you go, back towards a demon-filled dungeon where you notice some bars under lock and key. To get there you'll have to cross a crystal bridge but to do that you'll need a vine - you've probably already lost your rope. Have you got a suitable chopper to get the vine? Do you know how dangerous the bridge is?

This is one of the simpler of a mass of tangled tasks.

The net result is an adventure of pretty fair difficulty that will keep even the experts busy.

I found very little to feel negative about except for the occasional delayed response from the interpreter. In general it's verb/noun input but at times you'll need to say a little more - like stating which type of key you want to use for a door or where you want to put a particular object. This is no problem as far as I'm concerned, as I far prefer simplicity to the complications of some of the poorer full sentence parsers. The descriptions are crisp but, given the smartness of the graphics and the plethora of things to do, this doesn't seem a great loss. Even so, when you do get an amplified description you'll find it's literate and atmospheric. "The hunchback grunts noisily, in stark contrast to the ominous silence, as he ferries you across the river. You are on the north side of the river where you see the remains of an old bridge by a sand strip."

Terrors of Transtoss is a fine successor to Valkyrie and, according to Ram Jam, is one of a string of forthcoming adventures. I'm pretty sure you'll find it tantalising, frustrating and very satisfying to solve. In concept and design it's up at the top end of the adventure market, offering you fancy graphics, two-character play and a truly complex scenario.

Be thorough - old Trantoss is no walkover and his magic mace hard to destroy.

And when you've done that, you're still going to have to go through a great deal of the game again in order to collect the treasure and complete it.

Complex puzzles, an atmospheric plot and professional presentation make it a winner.

The Terrors of Trantoss | Overall Summary

Complex puzzles, an atmospheric plot and professional presentation make it a winner.