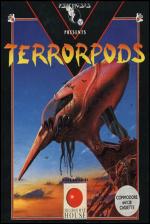 The Empire's three-legged mechanical mineral marauders, the Terrorpods, are running amok on Colian, a remote mining asteroid under Federation jurisdiction. Colian is host to six colonies mining the super-tough Aluma ore, Quaza fuel and the explosive Detonite, and the baddies are raiding the mines without paying for the stuff!

Of course, you're not going to let them get away with it. That's why you're in your little DSV, patrolling the 3D landscape and blowing away any Terrorpods you come across. The DSV is equipped with a laser and a supply of missiles: if the laser runs out, bye-bye pension. When the sixth colony is freed from the tri-pedal tyranny, you can return home with a smile on your face.

Duh? What's goin' on? This must be the most confusing game I've ever played. The ten keyboard controls aren't adequately listed in the instruction booklet, but an on-screen list is available from the title screen - what a useless idea!

On top of that, the controls seem to change around at inopportune moments. At one point, the 180 degrees rotate command got switched with the shield control, and further into the game, my DSV started launching missiles when it should have been firing lasers.

If Terrorpods was better presented and had improved graphics and sound I wouldn't be so harsh on it, but in this state I don't think it's worth anyone's tenner.

I knew transferring the 16-bit Psygnosis stuff onto the 8-bits was a mistake, and if Barbarian didn't prove it a couple of months back, Terrorpods certainly does not.

The only thing the original had going for it were brilliant sampled effects and snazzy graphics, but these have both been lost on the C64. The asteroid surface does scroll in parallax, but any effect of realism is lost when you try to move forward or back and the landscape doesn't move at all!

Even intensive playing doesn't reveal anything to recommend such a thoroughly unplayable game, even to a large fish which was threatening to eat me with its big pointy teeth.

Sound 55%
Average effects but no music.

Lastability 20%
You can only give it the benefit of the doubt for a couple of games.