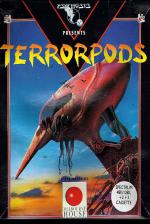 Three legs for the price of two!

Cohan may well be one of the bleakest places in the universe, but it's blessed with plentiful deposits of Detonite (a powerful explosive), Quaza (a power crystal) and Aluma (the hardest metal known to man). Six mining colonies were built to exploit these treasures, but soon attracted the attention of an Empire Mother Ship. But rather than simply destroying the colonies it enslaved them. In short, they were turned to producing the most deadly land-based weapon ever - the Terrorpod. Machines by which the Empire planned to conquer the galaxy.

Somewhat concerned about this, the Federation sent their best spy to snoop around. Comfortably strapped into your Defence Strategy Vehicle (DSV) you begin your mission, months pass before the inevitable happens and your presence is discovered. Eight Terrorpods are sent to destroy the six colonies, and the secrets they hold.

If you manage to destroy all the Terrorpods at a colony then you can collect a component from the manufacturing plant, then warp to the next colony in search of more secrets. There are six components needed to complete the game. Naturally the Mother Ship isn't pleased by your efforts and periodically despatches missiles to zoom over the horizon at you.

Despite greatly enjoying Psygnosis's last game, Barbarian, I was disappointed with this one. The graphics are simplistic and drab, while control of the DSV is irritatingly tricky. After playing for some time I found little evidence of any gameplay to make these faults bearable - which is a pity because the scenario and packaging is first class.

'Terrorpods is an ambitious idea, poorly implemented. The game is so difficult as to be impossible to get into - control of your vehicle is extremely awkward, while limited fuel and endless enemy missiles soon kill you off. Technically, Terrorpods isn't too bad, with an effective 3-D landscape. The main drawback is the badly designed gameplay and awkwardness of the controls.'

Technically, Terrorpods isn't too bad, with an effective 3-D landscape. The main drawback is the badly designed gameplay and awkwardness of the controls.