﻿ Terror Of The Deep (Mirrorsoft) Review | Your Sinclair - Everygamegoing 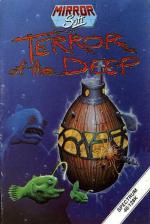 In the inky depths of Loch Ness, something stirs. Locals talk of strange creatures rising from the murky waters. Could they be connected with the glowing meteorite-like objects that fell from the skies so recently?

Mirrorsoft has coined the term 'adventure simulation' to describe Terror of The Deep. Adventure, because you're looking for whatever's been putting the wind up the locals kilts. Simulation because doing so is every bit as involved as it would be in real life.

Real life? Well, not really, because the game is closest to those century-old fantasies of Conan Doyle, HG Wells, and above all, Jules Verne. Like Lucasfilm's The Eldolon, you are presented with a piece of Victorian sci-fi equipment to conduct your investigations.

The eccentric Scottish engineer, who developed the primitive submarine capable of patrolling the icy waters, chose an inopportune moment to go to the great haggis ranch in the sky, leaving you the dubious honour of ringing out the old in his diving bell.

Using a cursor you choose where you want to be dropped by your surface vessel. While you're descending you might like to read the last words of the engineer, reprinted from his yellowing diary in the game's instructions. Pay attention, because they contain some valuable clues.

The first problem, when you hit rock bottom, is that there's no signpost saying, 'This way to the strange phenomena.' The diary does drop a hint on how to find your way to the strange pods that the engineer describes though. Set off immediately, because hanging around leads to unwanted attention from strange creatures.

As you patrol, fish glide by. Turn your chair to look through any of the submersible's windows and you can watch them go. Don't spend too much time spectating though 'cos you must generate power - and that swivelling seal eats up the amps - and oxygen.

You can turn, dive or surface, or choose weapons, so that you're always prepared for any unpleasant encounters. If you begin to run low on fuel cells or spears, simply ask the ship to drop more. And if there's no sign of monsters, surface, relocate and try another site.

Terror Of The Deep is a clever game, with nice graphics, and it can be quite atmospheric, especially if you play it in a darkened room, away from all distractions. There's even a version for 128 owners, with enhanced sound, on side two of the tape.

But fishing for the Loch Ness monster isn't the sort of activity for a Saturday afternoon. You'll spend a lot of time wandering around in the dark if you're to locate anything, and many people may find that boredom sets in before the not-so-wee, timorous beastie arrives.

Maybe more landlocked deduction, to help you locate a likely location, would have added variety. As it is, for patient players in search of a decidedly different type of adventure, this is ideal, but arcade freaks may prefer it to sink without trace.

For patient players in search of a decidedly different type of adventure, this is ideal. Arcade freaks may prefer it to sink without trace.