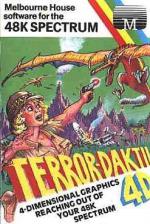 MELBOURNE HOUSE has taken its time in releasing Terror-Daktil 4D for the 48K Spectrum. The reason may be that the company wanted to produce a program which is up to the standard of The Hobbit but that adventure is a difficult act to follow.

The game displays a three-dimensional landscape over which the terror-daktils fly in their attempts to destroy you. Your cannon and cannonballs are ready but you have to hit the creatures in the body if you are going to score.

The bodies of the birds are difficult to hit when they are in the distance as they look like over-sized space invaders.

The best part of the game is when the birds swoop from formation and dive at you and your thimble-sized cannon.

Once the action starts you will have your hands full with birds swooping from nowhere. We were surprised to discover that you can hit a bird even if your cannon shot is too high in its trajectory. That effect is a mark against the game but is necessary as the cannon will not move very far up or down.

When you start to play the demonstration mode, which is more than a minute long, it is very dramatic and picturesque but it can become monotonous if you want to get into the game.