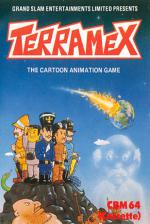 Two decades ago, Professor Albert Eyestrain predicted the Earth's collision with a gigantic meteor. Derision forced him into hiding, but those who laughed then do so no longer: the Earth has only one month before disaster strikes!

From a character selection screen, the player controls one of the world's five most reputable explorers in a mission to seek out the Professor, since only he knows how to deflect the meteor.

The screen displays the flick-screen playing area, with all the objects to collect and creatures to avoid. Different objects hold pre-determined functions which need to be discovered and used in the right place in order to facilitate progress. An information panel below details the current and high scores, number of lives remaining, current object in use and those held by the invisible 'bearers'.

It's very difficult to create humour in a computer game, but Terramex goes some small way to succeeding. It does capture some of the 19th Century exploration spirit in its choice of characters and their uniforms, reworking them into bold, cutesy and colourfully comic sprites.

However, the background graphics are less impressive, even a little simplistic; only the occasionally excellent anmation saves the whole effect from failure.

The main problem, and the one which crucifies the game, is the ludicrously cryptic puzzle element. To say that one of the easiest is that a 'scroll' is necessary to launch a balloon (party manifesto equals hot air) will give you some idea.

When such objects are required to make any real progress, the fun rapidly sours into tedium.

As an added annoyance, the sound involves few paltry spot effects, whose simplicity even the cartoon format can't excuse. At a much lower price, the reception might have been warmer; as it stands it's far from the top of my list.

I like a good platform/arcade adventure, but not when the gameplay is badly crippled by a series of moronic and ambiguous puzzles.

With Terramex, progression is made through trial and error, and not clear logic. You just have to keep on trying things out until they work, rather than sitting down to work out the puzzle.

I don't mind if a problem is difficult - but these ones just seem like a long series of the programmers' own in-jokes.

Instead of experiencing triumph when a puzzle is solved, you end up feeling relieved that you've got that far (and I thought this was supposed to be entertainment).

If the gameplay had been a little better thought out, I think I would have quite enjoyed the action - the graphics and sound are by no means bad, and the presentation is generally attractive. However, Terramex is just too unrewarding and self indulgent for its own good.

Presentation 68%
Average instructions, limited character movement, but the option of five characters to choose from.

Graphics 49%
Big, bold and cute sprites, but below average backdrops.

Sound 15%
Feeble in all respects.

Overall 31%
An excessively complex game that would have benefitted from a lower price tag.

Any fun in this rapidly sours into tedium.