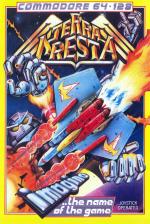 Like Xevious, Terra Cresta is a coin-op classic. Imagine has gone back to the vaults, dusted the cobwebs and dragged it on to the C64 - and a pretty good job they've done too.

It's addictive, fast moving and extremely difficult - just what every shoot-'em addict wants from a game.

If you've never seen this arcade game in the flesh then you won't know that the object of the game is to orbit a planet, blasting away at nasty alien attackers and collecting extra bits of your ship, the terra cresta. These extra parts give you extra firepower and can be flown in formation to enable you to complete more difficult stages of the game.

It's this "Transformer" style gimmick which makes this shoot-'em-up different from the vast selection currently available to the square-eyed zappers out there.

The extra parts of your ship are stores in numbered silos on the planet surface. Aliens will do anything and everything to stop you collecting the bits of your ship.

They fire all kinds of missiles at you. Most of them are homing missiles - so you have to use the superior manoeuvrability of the Cresta to outwit the missiles, rockets and flying mines.

You can move up, and down left and right as the screen scrolls - sometimes - horizontally. Try to shoot everything early enough to give you a chance to dock safely with the extra bits of your ship which appear slowly from the silos once you've blasted them.

At first you are limited to a mere double-shot laser. Pick up the second craft and you've doubled your firepower - and so on. Watch those suckers blow!

Being able to duck and weave and fire at the same time is the key to success in Terra Cresta. Learn the waves - the aliens come at you in the same formation time after time. And watch out for the deadly flying Jammy-Dodgets - they can be irritatingly lethal.

At the end of each orbit you'll come across a deadly robot which must be destroyed.

Codemaster Dave Collier and his graphics man Steve Wahid have produced a classy coin-op conversion which is enhanced by Martin Galway's nifty soundtrack.

I didn't like the long start-up sequence. It seems to take forever before you get down to the serious business of blasting.

Terra Cresta is one of Imagine's better offerings - it's a challenging zapper which will please even the most demanding joystick jockey. Watch out for it.

Terra Cresta is one of Imagine's better offerings - it's a challenging zapper which will please even the most demanding joystick jockey.