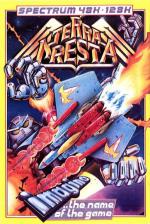 Another arcade conversion from Imagine, this time of a space shoot-'em-up that reminds me a bit of Gargoyle's Lightforce. You control a spaceship flying over the scrolling surface of a planet guarded (stop me if you've heard this one before) by wave upon wave of aliens who will swoop out of the sky and try to blow you all over the place. Plus, at the same time as dodging and firing back at the aliens you've also got to destroy the weapons silos on the ground which are adding to the fun by lobbing bombs into the sky.

Needless to say, all this skyborne action keeps you very busy, but as you pick off the silos you are rewarded with additional weaponry that helps you blast your way through to the final stages of the game where you'll probably be trashed by a huge robot-ship.

It's all fairly standard shoot-'em-up action, professionally presented but not exactly oozing with originality. For some reason (probably to keep the conversion as faithful as possible to the arcade original) the playing area occupies only the right-hand side of the screen, while the rest is occupied by the Terra Cresta logo and score tables. As a result, the graphics in the small playing area, though reasonably well drawn, are pretty small and require close attention to keep an eye on what's happening. I know it might mean a less-than-faithful conversion, but it might have made a slightly better game if the programmers had used the whole of the screen for playing it - as it stands it looks a bit like you're only getting half a game since one half of the screen is virtually useless.

There are no major faults in Terra Cresta but without a bit more originality it's not likely to take over as anyone's favourite shoot-'em-up.

There are no major faults in Terra Cresta but without a bit more originality it's not likely to take over as anyone's favourite shoot-'em-up.