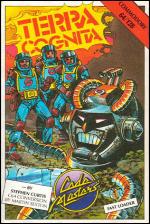 The Krion are out in force, eager to destroy anything human that gets in the way - which means you, in the seat of your fighter. A mother ship, and safety, is 100 vertically scrolling screens away, and involves traversing a tortuous landscape and destroying attacking aliens.

The landscape is composed of squares, mostly solid walls which form mazes and corridors - some leading to safety, and others to dead ends. Hitting a wall destroys your fighter, which means it has to take off again from the nearest launch pad. Another hazard is the time shift square, which plonks you back at the beginning of the first screen.

Points are scored by passing over bonus squares, and shooting the alien droids which drift across the landscape. Droids can also be destroyed by first passing over a square which gives the ship invincibility, and then smashing into them. However, smashing into walls still results in death.

Squares labelled 'plus' and 'minus' temporarily affect the speed of the craft. The minus squares are vital, as the ship's speed must decrease for it to be able to negotiate some of the more difficult maze sections.

Other squares provide extra lives and fuel - which is used up very rapidly, so virtually every fuel square must be taken to survive. When the ship moves into a new section, the 'clear' squares change in style - passing 100 of these, and you're home and dry.

As you would have expected from their pedigree, Codemasters are making a name for themselves by producing highly playable, good quality budget games. There is nothing terribly original here, but it is all very nicely packaged - and cheap.

I found the repeated background changes very confusing, as all the metallic detail makes it difficult to distinguish the droids from your ship. Also, when you change section it takes quite a while to sort out what's background and what's wall - very off-putting, but perhaps that was the idea.

Still, this is a very polished product that should find favour with the shoot-'em-up fraternity.

This is a bland, vertically-scrolling shoot-'em-up which has many frustrating points. The backdrops make the going really tough - sometimes it's virtually impossible to see where your ship and the attacking aliens are.

It's also frustrating having to find out the hard way which squares can be traversed safely and which can't. The objective is to make your way through the program's hundred screens, a task which can only be completed if the landscape is meticulously learned - and personally I don't think this game deserves that sort of perseverance.

If you've got a spare couple of quid... shop around - there are loads of better budget games than this.

I don't believe it. *Another* vertically scrolling shoot-'em-up. I don't want to see any more, please - even at a budget price. This particular genre has been beaten senselessly to the floor, and Terra Cognita has the audacity to kick it while it's helplessly convulsing on the floor.

Once again, what we have here is nothing special - it's repetitive, and the unclear backdrops only serve to confuse. To make matters worse, it's very frustrating, especially when you have to go back to the start when you die. Unless you're a sucker for run-of-the-mill, vertically scrolling shoot-'em-ups, don't bother with Terra Cognita.

Presentation 71%
Average, with a bog-standard title screen and in-game presentation.

Hookability 45%
Easy enough to get into, mainly because it's all been seen before...

Lastability 38%
...which is why it proves so dull.

Value For Money 48%
It would be a cheek to charge much more.