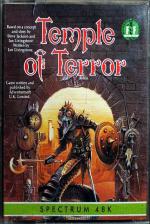 This is a major release in the adventuring world - it's one of the 27 Fighting Fantasy Gamebook titles. (Other titles released as computer games so far are Seas of Blood and Rebel Planet.)

After a usually-well-written fantasy piece to set the adventure, the books lead you through a magical world by setting you tasks and puzzles as in a computer adventure - but the different paths you can follow are indicated by page references.

These references lead onto other paragraphs, constructed so that a player can follow many different paths toward completing the game. That's why they're called 'gamebooks' - reading them page by page in order wouldn't make sense, as the conclusion of the game is just as likely to be at the beginning of the book as at the end!

Seas of Blood was true to the Fighting Fantasy Gamebooks - it employed a combat system - whereas Rebel Planet and Temple (71 Terror are straightforward adventures.

The monster encounter boxes with their Skill, Stamina, Luck, Spell and Provisions entries add tremendous character to the books, and the omission of their counterparts from the computer games is a letdown.

But, as with all Fighting Fantasy-inspired software, there's a superb story line.

The background given on the inlay comes directly from the book, comprising the introduction plus the first two noncommittal moves.

Born under a full moon and abandoned by his mother, Malbordus grew up in the Darkwood Forest in the care of the Darkside Elves. He was taught the Elves' wicked ways, but in order to receive instruction in the arcane and evil magic of the Elf Lords he had to pass a test. He was ordered to journey south to the Desert Of Skulls to find the lost city of Vatos.

In the city were hidden five dragon artefacts which Malbordus had to collect. A simple incantation would bring the dragons to life, and he would then instruct them to fly him back to Darkwood Forest and the army assembling there. He would receive the ancient powers and lead the hordes in an unstoppable wave of death and destruction.

But on the edge of Darkwood lived an eccentric old wizard who became aware of these plans. The wizard travelled to Stonebridge to tell of the impending doom and to seek a volunteer for the quest: to stop Malbordus collecting the dragons of Vatos.

You, naturally, volunteer and the adventure begins when the wizard's guiding crow leaves you at the banks of the Catfish River.

The computer game has you start at this river, by a rope bridge. Crossing it would seem the only way forward - but if you go down to the nearby jetty you won't be welcomed by the drunken pirates. So GO BOAT is a rather uninspiring start!

Instead, go onto the bridge. Unfortunately here the game doesn't tell you which of the two options, NORTH and SOUTH, takes you away from the chasing pirates. You just have to guess.

Checking your possessions with INVEN (I is not enough), you discover the spell book given you by Yaztromos, a sword and a trident. Reading the book reveals the four spells to help you through your thankless task: sleep, dart, incendiary, and shrinking.

Each spell can only be used once, so blowing all on the Harpy you meet early on isn't such a good idea, especially as the very useful BOM (Back One Move) won't restore these spells if you get kilted.

The first of the enemies you can take on are the Dark Elves, encountered by a burning hut. Trying to kill them with the sword seems to do the trick with the report 'Your opponent is dead; but there were two elves so this report isn't quite convincing (still, the location description does report two dead Dark Elves).

Trying to examine or search the body that materialises now comes to naught. But there's some advance to the south, where if you examine everything you find and try things in a different order you might progress.

The vocabulary might seem as a little unfriendly, but it would be more accurate to say it's precise. When you're reading a note, for instance, only the word MESSAGE is accepted because this is the term used in the location description where newly-found items are installed.

Temple Of Terror is quite an attractive illustrated adventure. Adventuresoft still use a white background which limits text colour options (and indeed there are no text highlights), but at least with the bright pictures the surrounds don't glare as much as they might. The pictures themselves are not unattractive, though they have a sparse look.

The adventure clearly has a good background with its Fighting Fantasy story, but I can't help but get annoyed at the strangely inappropriate programming, the curious stutters and the lack of finesse in communication and presentation. Why don't Adventuresoft overhaul the whole system?

The adventure clearly has a good background with its "Fighting Fantasy" story, but I can't help but get annoyed at the strangely inappropriate programming, the curious stutters and the lack of finesse in communication and presentation.