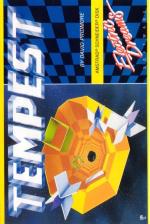 A real blast from the past this one. Originally brought out by Atari as a vector graphics coin-op game, it has now made it to the Amstrad and will soon be available on the Commodore and Spectrum.

One of the all time classic shoot-'em-ups, Tempest is based on looking down a three dimensional grid of energy - the hyperspatial wireways. These guide travellers on their journeys between star systems. Unfortunately, cracks have appeared in the worm holes in space and enemy alien creatures have penetrated the wireways, bringing interstellar travel to a halt. It is your job to eliminate these creatures from the galaxy.

The game itself has a large number of different tunnels going into the screen - all in stunning pseudo-vectorvision. Your craft is based around the rim of the wireway and can fire down it at the aliens as they travel up the tunnel towards you. There are different types of aliens, all with different ways of being nasty to you. Some spiral up the tunnel, some come straight for you and some bud off high speed balls at you - all very unpleasant. After you have cleared one wireway you move on to the next one.

Different wireways have different cross-sections, this affects the way that you see the aliens and the speed at which you can transverse the grid.

This is an excellent game that was a coin-op hit or many years and can still be found occasionally. The gameplay is superb, and incredibly fast - everything that a good shoot-'em-up addict loves. The animation is smooth and the craft is very controllable making the game easy to play.

I cannot praise the game highly enough. The conversion from vector to raster-type displays is perfect, and it is interesting to note that the game was written on the Amstrad first because it is the slowest of the big three machines and Electric Dreams wanted to get the speed and gameplay right first. If this is the slowest version, then God help Commodore and Spectrum owners!

I cannot praise the game highly enough. The conversion from vector to raster-type displays is perfect.