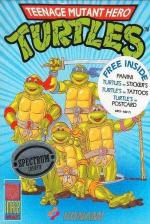 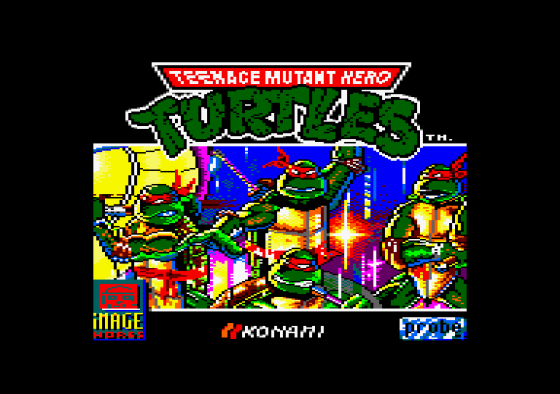 Like a total schmuch, the villainous Shredder has kidnapped the very wonderful news houndette, April O'Neil. He's carted her off to his secret hideout to brainwash her into joining his Foot Clan, and only her four amphibian pals, the Teenage Mutant Hero Turtles, can save her!

The game starts above ground, with the player in control of the Turtle of his choice. Foot Soldiers and Shredder's Steam Rollers are on the prowl, so the best thing to do is to quickly duck into a nearby manhole and cross the town via the sewer system.

But things are even more dangerous underground! Foot Warriors and a variety of other weirdoes are running all over the place, and contact with any of them knocks the Turtle's energy bar for six! Luckily, if one of the gang is running out of energy, you can take him out of action and immediately replace him with a fitter Turtle. This sort of teamwork is essential if you're to defeat some of the bigger baddies, such as Bebop and Rock Steady, who make appearances early on in the game. 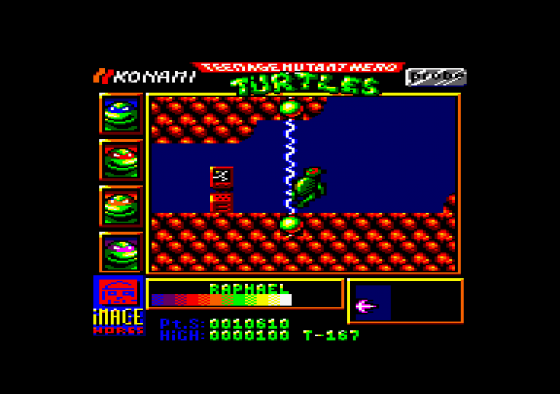 Each Turtle is armed with his favourite weapon, but they vary in effectiveness. There are, however, long-range weapons such as shurikens and boomerangs available, but you have to find the respective icons first!

I have to say I was a bit disappointed with the American Amiga Turtles game when we saw it a few months back, and so I didn't expect great things of the Image Works conversions of the same game. However, I'm quite gobsmacked by this Amstrad version!

It's not the most original or ambitious of game concepts, but it's surprisingly good fun to play. The platforming/beat-'em-up action is good enough, but the ability to flip between different characters provides the essential Turtle teamwork element.

The above-ground graphics are a bit weedy, but the platforming sections are very well-drawn - big, colourful sprites, all nicely animated, and the Turtles' masks are even the correct colours!

Even if you're not the world's most manic Turtles fan (I'm not), you may well find yourself pleasantly surprised by this excellent licence, which deserves to sell like hot cakes.

This version (and the Amstrad version, actually) were programmed by the team behind Savage and Dan Dare III, so it uses lashings of colour very well. The sprites aren't quite so nice as the Amstrad's version's, but the gameplay is just great.

Guaranteed to please Turtles fans across the nation!

Even if you're not the world's most manic Turtles fan, you may well find yourself pleasantly surprised by this excellent licence, which deserves to sell like hot cakes.