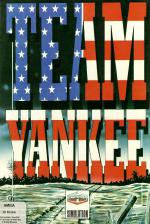 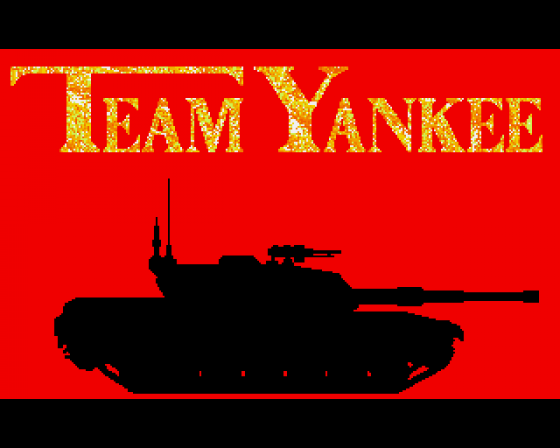 Harold Coyle's best-selling novel was praised for its action and superb realism, telling the tale of how Team Yankee (a US army company) takes on the Soviets in World War III. The game reduces the novel to five scenarios, with you beginning at the rank of private. There are eight service records which automatically record the results of your battles, kills/losses. Fortunately, losing does not wipe your record. If you complete all five scenarios you're promoted, making the game tougher with more intelligent enemies. So five ranks make twenty-five different battles, four or five of which happen at night. Each scenario begins with a briefing, after which you can select the timing and location of artillery strikes (if available).

Once in the game, you have command of four platoons, each containing four vehicles. Initially, the screen is split in four showing the view of each platoon. Any of these displays can be clicked on to fill the screen. There are three types of display: on the Map Screen you set the destination, speed and formation of a platoon. The Status display shows how much ammo each platoon vehicle has, as well as its morale and efficiency. Finally, there is a 3D view which is always from the platoon's most powerful vehicle. Icons can magnify the view ahead, produce engine smoke and use infra-red to see through smoke. You can also rotate the turret and select weapons, the M-1 tank has HEAT shells, shorter-range but more lethal SABOT shells, smoke shells and machine guns.

Other Army vehicles aren't so well equipped, the M113 troop carrier only has a machine gun, while the M-2 carrier and ITV have a machine gun plus a few TOW anti-tank missiles. Thankfully you don't have too many of these vehicles, but in later missions you'll have to protect a convoy of troop carriers. Other scenarios require you to defend villages or attack and secure set positions. 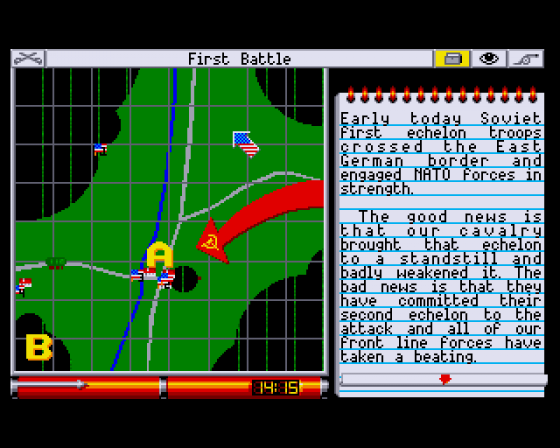 Yankee can't compare with M-1 for realism, but it's an extremely playable and enjoyable sim. The essence of the game is a mix of tactics - critical in positioning your forces and timing artillery strikes - and arcade action.

Swivelling the turret, finding the enemy, getting a laser lock-on, waiting for a round to be loaded then knocking a tank out all requires good reactions.

Then as soon as the first shot hits, the rest of the platoon will know your position and return fire, so it's critical to take them all out quickly. This is great fun, helped along by great graphics. 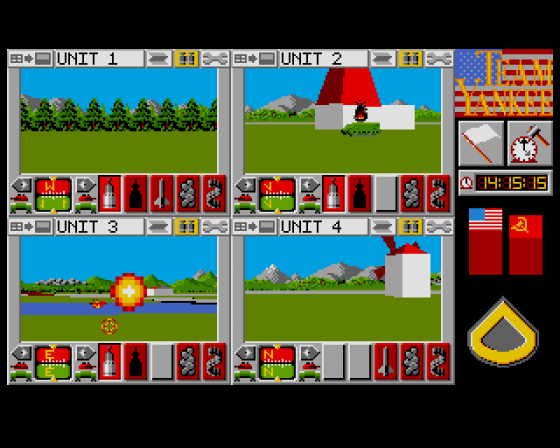 Up close things are blocky, especially the UDG-style forests, but overall the effect is top-notch. The game's only real drawback is the lack of scenarios.

After initial scepticism over Yankee's depth, I loosened up and began to enjoy the pure blasting with a healthy dose of strategy thrown in to keep you hooked. Using the gunsight to lock onto and then fire at targets smacks of Operation Wolf but with a little more thought about it.

The Let Sleeping Gods Lie 3D system has been speeded up markedly, seeing a column of tanks rolling past is very impressive! Mouse control and the icon system all work well with a rather nifty line in four views at once. What I *really* want to know is why didn't programmers ODE provide a lot more missions rather than the basic five just played at different skill levels.

Graphics 83%
Unique ODE system at its best, blocky close-up but fast and excellent at mid-range. IR good too.

Hookability 88%
Extremely easy to get into, with a great practice intro and relatively easy first scenario.

Lastability 77%
Only five scenarios, but playing them at different skill levels provides a substantially increased challenge.

Overall 81%
A superbly executed mix of tactics and shoot-'em-up action.

A superbly executed mix of tactics and shoot-'em-up action. 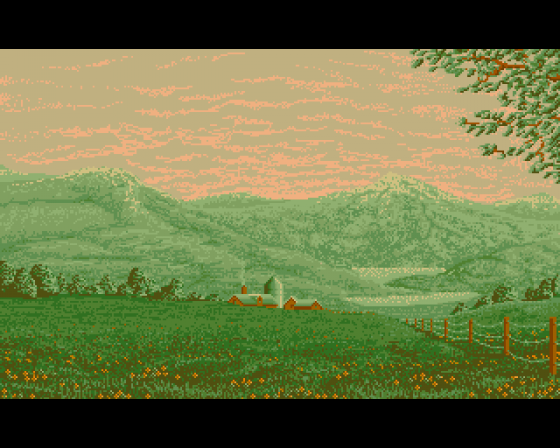