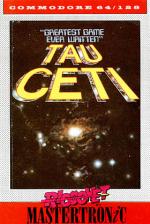 A meteorite has damaged a computer controlling planetary robot defence systems and a huge nuclear reactor - which is now threatening to explode, making the planet Tau Ceti uninhabitable. Your mission, should you choose to accept it, is to pilot a ground skimmer through Tau Ceti's network of colonies, hunting out the reactor's cooling rods, and thus saving the planet.

The robot forces don't seem to realise you have their planet's welfare at heart and make a point of showing off the quality of their laser marksmanship. It's a 3D shoot-'em-up adventure of remarkable quality: the buildings on Tau Ceti are all shaded according to the position of the sun, which tracks relentlessly across the sky, creating very atmospheric day and night effects.

Another Commodore classic of yesteryear which makes an unmissable budget release.

Another Commodore classic of yesteryear which makes an unmissable budget release.