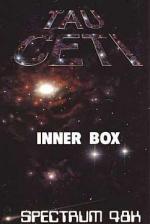 "My shields are low, the scanner is out, I've fired my last missile and there are three Hunters on my tail...! I need to find a repair centre fast! There's one - and the airlock is opening. But will my Gal-Corp Skimmer make it before those Hunters wipe me?"

Just where in the galaxy have you landed now? On Tau Ceti, that's where. The roughest, toughest planet in the known universe. And you're playing what we at C&VG confidently predict will be the Christmas Spectrum number one. Big words - but just look at what's in store for you if you're lucky enough to get your hands on a copy.

Take Elite, and a dash of Impossible Mission, and some 3D Tank Duel to add some spice and you've got the recipt for a real blockbuster. And we haven't even mentioned the super fast scrolling, neat graphics and totally addictive gameplay.

But before this review starts going totally over the top, let's take a look at what the game is all about.

Basically it goes like this. A plague has decimated the inhospitable desert world of Tau Ceti and the tough pioneer settlers have been forced to evacuate the planet, leaving behind the automated systems which helped them survive.

As scientists battled to find a cure for the mystery plague a massive meteorite smashed into the planet. And something went horribly wrong with the automated systems - all the droids and defence systems ran amok destroying anything and everything that dated to venture into the cities of Tau Ceti.

The systems are controlled from a massive fusion reactor in the planet's capital - Centralis.

Someone has to get in there and shut down the reactor using hidden cooling rods and stop the rogue robotoids - that someone is you!

After all, the scientists have discovered a cure for the plague now and Gal Corp want to start making some cash out of the planet, again...

So it's into your Skimmer and down to the planet where all the adventure and danger you've ever dreamed of is waiting.

You've also got an onboard computer to help you work out just what is going on down on Tau Ceti!

On loading you see a view of the skimmer's instrument panel. The screen is divided into three areas. The large window on the left is your viewscreen, below that is a long blue area. This is your contact with the Skimmer's powerful computer. At the right of the screen are five information windows. At the top is a compass and real-time clock along with a message showing the direction of the view selected, the city you are in and the ship's flight status. Below that is the scanner which gives a plan view of your surroundings, and below that three more smaller windows. The first gives the pilot's name and the scanner's complement of missiles and flares.

The third displays two automatic direction finders - the upper one locked onto the city and the lower onto your lander.

The Skimmer operates it two modes, flight mode and ground mode. In flight mode control of the program is via single keys or a joystick.

In ground mode you are in direct communication with the skimmer's computer via the computer window. You see the message "Type help or some other command" in the computer window. Type HELP and the commands you can use are listed. Commands like MAP, RODS, LAUNCH, EQUIP, STATUS etc.

Moving a cursor over the name of the city and hitting the Fire button enables you to get a readout on the city's status. You can even ask your computer to FIND you a specific city and tell you all about it if you wish.

The RODS commands is a bit like the "pocket computer" part of Impossible Mission. You need to find all the rods to be able to knock out the Centralis reactor.

There are several types of flying nasties in each city - the toughest are the Hunters - there are three types of these and each are bad news to the average Skimmer pilot. There are also automated fortresses which take pot shots at you.

Should you take a lot of stick from the various attackers you can zoom into one of the repair and equipment centres for more missiles and a 6,000 mile service through airlocks which open as you approach.

Some of these centres are civilian and hold no weapon supplies. Other are military bases. You'll soon know how to tell the difference!

This game has some really nice touches. Try landing without slowing down and you bump along the ground! Shoot a guided missile at a retreating Hunter and you'll see it explode on the horizon - just like in Bugs Bunny cartoons when the villain is running away and Bugs chucks a stone which hits him just as you think he's escaped out of the frame!

It's even got its own built-in notepad for you to write hints and information on as you go. You call this option up by simply typing in PAD on your computer.

You'll soon get the hang of using the map, computer and controls - and recognising hazards, building and airlocks. Don't approach an airlock too fast. You'll find out what happens should you try it...

If you only buy one game a year, then get Tau Ceti. You won't be bored for another twelve months!

If you only buy one game a year, then get Tau Ceti. You won't be bored for another twelve months!