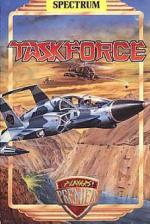 Before you say anything I world just like to point out that task Force is not anything like Cybernoid II... well perhaps just a bit then (hem hem). But what's it all about?

Snide Gantree has been up to his old tricks again and with his evil mercenary mates has overrun our top secret South Pacific Airforce base. The naughty people. In less than live hours Snide's men will have hacked into the targeting computers that control all the cruise missiles, and you know what that means... trouble with a capital TRUB!

The game is made up of loadsa screens, all which have really neat and well-coloured graphics. The main sprite, like the aliens, is not all that detailed, but the non-stop action keeps your mind fully alert. As with many other Players games there are mini puzzles to be solved in between the action. I recommend this for a good blast but don't expect much lastability.

I recommend this for a good blast but don't expect much lastability.