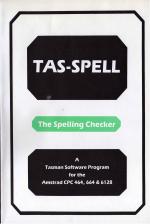 It would be nice to believe that a word-processor could actually improve your writing ability. Unfortunately, this just isn't true: word processors can make writing, adjusting and rephrasing a document easier, but they won't turn anyone into a literary genius.

Once that last adjustment has been made, one final stage must be completed before any document of importance can be sent out - the spelling must be checked. This is not only very boring for a human being to do but is prone to human error, sloppiness and ignorance. It's a pretty hawk-eyed writer who can spot all spelling errors as well as those typing mistakes that turn 'ands' into 'adns', 'thes' into 'tehs'.

Tasman's Tas-Spell is an impressive - if not quite total - solution to the problem. The only really bad point about it is that it will only work with Tasword 464-D or Tasword 6128. There are in fact two versions of Tas-Spell, one on each side of the supplied disc, for Tasword 464-D and Tasword 6128. People who bought Amsword or cassette-based Tasword will need to upgrade to the full disc program.

The reason for this is that Tas-Spell is supplied only on disc. And the reason why it is supplied only on disc is its sheer size - it contains over 20,000 words, or roughly 100K of data. This is pretty impressive when you consider that the average educated adult probably has a vocabulary of around 25,000 words. Trying to load such a system from tape would be far too complex; you would have to keep fast-forwarding and reversing the tape to find the right dictionary block.

To run a spelling check, you first have to go from the text file to Tasword's main menu and press K. You then need to insert the Tas-Spell disc in the disc drive and the program can then load.

One welcome feature of this utility is its simplicity in use. The program asks for the bare minimum of information, and then gets on with the job. On loading, the program offers just six options. Pressing Enter makes Tas-Spell go away and check for spelling errors.

Tas-Spell operates by running 'passes' through the text. There can be up to 21 of thee as the program compares each block of text with each block of its dictionary. It is at this point that you will notice that the program is not fast - don't use if you've got a long document you want to check before catching the post. When it finds a word that is not in its dictionary, it highlights the word and the lines around it and then it asks the user exactly what they want to do.

The program, of course, is not 'intelligent'. It will recognise word roots, but compounds formed by means of suffixes and prefixes may lie beyond its ken. Hence, Tas-Spell recognised 'stablised' but not 'destablised', which is only to be expected but is the kind of thing you need to bear in mind when using it.

On highlighting a word, Tas-Spell offers the user three options. L will cause Tas-Spell to add the word to its dictionary. In theory, since there is about 40K of space on the disc, up to 10,000 new words can be added. In practice, the maximum number of new words is about two thousand. This should be enough for anybody's needs since, after all, you can read some newspapers quite easily with just a 500 word vocabulary. Users of technical or foreign vocabulary will find this most useful.

I will make Tas-Spell ignore a spelling. For example, if you have a lot of names in your file, and you don't want to add them to the dictionary, then this command will solve the problem.

C will allow you to change the spelling of a word if you have made a mistake. On the 464 D version, you can edit it from Tas-Spell, but the 6128 version forces a return to Tasword. This may seem a little strange, but if you have made a whole series of spelling errors in succession - say you started pressing a 'p' instead on an 'o' - then it saves a lot of effort for 6128 owners. Unfortunately, it corrupts Tasword 6128 in the process, and so once the program has had the spelling checked, Tasword would need to be reloaded.

Further options include a number-trapping function which, when on, will ignore words containing numbers. numbers alone are always ignored. S will switch on the single letter trapping function and will reject any single letters other than 'A' or 'I'. D deletes words from the dictionary, while T will put you back into Tasword.

The manual states how to create your own 100K from scratch, and also how to configure the Tasword/Tas-Spell system for Amstrads with two disc drives, so you could have Tasword and your text files on one drive, and Tas-Spell on the other.

P. Simple and easy to use.
P. Better than Spellstar.
P. Easy to add to dictionary.

N. Only works with Tasword on disc.
N. Pretty slow.