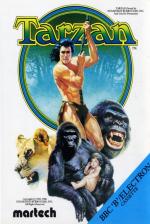 Tarzan, the mighty muscled aristocrat raised by the apes in the jungle, has been around for seemingly an eternity. The first story from the pen of creator Edgar Rice Burroughs was published in 1911. Books and films have abounded. The subject is ripe for a computer game and Martech has been the one to capture the licence.

The resulting game is a huge arcade adventure with stunning graphics - some of the best I've seen for the Spectrum - and super smooth animation.

The plot is simple. Jane, Tarzan's soul-mate has been captured by Usanga, chief of the Wamabo. Her fate may not be a pleasant one - being devoured by a panther and having her bones picked over by a vulture.

It appears the Wamabo have been upset by the theft of seven gemstones -- known as the "eyes of the rainbow" from their tribal temple. Unless Tarzan can recover their gems within three days, Jane will be the main course on the jungle menu.

Game play time is measured by the changing colour of the screen, representing day turning into night and back again. The speed at which the days pass - remember Tarzan only has three - depends on how well the Lord of the Jungle does. For instance if he gets hit by a spear, falls into quicksand or mauled by a rampaging big cat, the day passes quickly.

Scattered throughout the jungle are various objects which Tarzan can use. These include ropes, torches, shields and, of course, the gemstones, These are represented on the screen by little black boxes - some of which are remarkably hard to see.

It's only by picking these up that you get to its contents at the bottom of the screen.

Within a few screens of moving around the jungle you'll easily become lost. A map, a map, my jungle kingdom for a map. I cried.

Moving around Tarzan will come across various animals. Some will be friendly and helpful, others will view the Lord of the Apes as a mobile snack bar and try to take a bite out of him. I always found the nasty ones.

There are also natives walking around, again some are friendly while others aren't.

Tarzan can run, jump, duck, jump, somersault, and, along with all the other jungle characters, is nicely animated.

Summing up, Tarzan is probably one of the best looking Spectrum games of recent months and, although it's a little weak on plot, it is addictive enough to keep you playing.