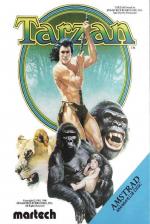 The chest-beating hero has made it into pixels at last. And all for the best possible cause: rescuing Jane. By the time you arrive, she'll probably have rescued herself, but it's the thought that counts. Your task as the yodelling apeman is to find seven coloured gemstones and return them to the chief of the tribe holding Jane hostage.

You've got three days to complete the task, which isn't a lot when you have to go through what Tarzan does. The screen display is a 2D side-view but cleverly constructed to give foreground scenery in silhouette and background scenery in full colour. In between is where the action takes place. You can run and somersault around but will encounter many problems.

There are snakes and lions roaming the jungle. They lose you time if you hit them. Even more serious is being crawled on by a spider, which really eats up the time left. Another danger are the spears thrown from the edges of the screen. These dangers have to be ducked or jumped. You can fight with a native who comes onto the screen, since you can't go over or under him. Enough punches and he'll fly off screen.

The adventure element of the game is quite tough: there are several objects to be found and used in your quest. Finding them is tough because of the jungle's dangers, but then you've got to work out what to do with them. For instance, a rope will help you swing across a pit.

There are some nice touches in the game like the scenery and the puzzling. I found the fighting gets on your nerves, but it's there to make things tougher. The music is good, and you'll need to like it because it plays throughout the game, and the game is going to take a lot of solving.

As soon as the game has loaded, you are treated to an easily recognisable melody - it's the theme tune to Tarzan ("What else?" you might say) and very nice too. It is colourful, enjoyable and humourous.

I'm not sure whether Tarzan is supposed to be a Morris dancer; he certainly seems to throw himself around when fighting.

N. Fighting can become tedious.
N. May be too hard.

Colourful, enjoyable and humourous. I'm not sure whether Tarzan is supposed to be a Morris dancer; he certainly seems to throw himself around when fighting.