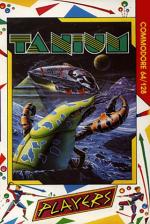 Having successfully vanquished the alien hordes in Warhawk, the trigger-happy player of Tanium faces a fresh threat. The capture of the eponymous planet by unknown enemies provides the ideal stage for a retired blaster's comeback.

The action scrolls from left to right, the objective being to avoid or destroy successive waves of aliens. Landscapes are harmless, but contact with enemies is fatal. At the end of a level the screen stops, and combat ensues between the player and a swift, wriggling serpent. Successful annihilation allows passage to the next level.

An information strip details the score and ships remaining (initially three). Additionally, it indicates the type of alien wave and the kind of ship customisatin collected. These extra features are obtained by destroying entire alien formations, and include extra speed, firepower, lasers and shields.

With the omission of a couple of annoying faults Tanium could have been a decent Delta variant. The basic drawback is the irritating necessity of collecting weapons at the correct time.

This is practically all the game consists of, since falling to grasp them is a ticket to Game Over. More annoying still is the loss of all gained features with the ship; realistic it may be, but enjoyable it's not. It is mildly addictive for a short while, but because the difficulty is honed to the point of utter frustration it quickly grows tiresome.

The graphics and aurals are nothing special: reasonably conceived but dull sprites and mediocre backdrops complemented by weak blasting effects. Tanium is far from the high standard attained by its predecessor.

Hookability 43%
Impossible to progress if the correct weapons aren't obtained; otherwise a matter of learning formations.

Lastability 28%
The lack of freedom and variety quickly leads to frustration.