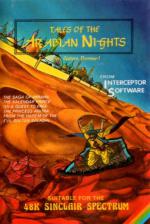 This game first appeared sometime before Christmas on the Commodore 64 and generally received favourable reviews.

Don't be deceived into thinking that Sultan Saladin is some form of cold and healthy crinkly green meal served with dried fruit. He is in fact a very unsavoury character from the Tales of the Arabian Nights who practised the same nasty habits as the black widow spider only with the roles reversed as a result, the Sultan's brides last a short time! Prince Imrahil's sister has been seized by the Sultan and is taken to Baghdad. It's up to you to help him rescue the girl.

The journey to Baghdad begins aboard one of the Sultan's ships where you must collect, in order, the golden jugs each bearing one of the letters in the word AR- A-B-I-A-N. As you scamper about the rigging a multitude of nasty monsters from above and below the water attack you.

From the ship it's up river by raft to a great cavern where you encounter Al-Khemized and his dreadful genies. While you ' re in the cavern perhaps you could just have a quick jog round and put the jugs in order then you can move on; to the desert. The desert scene, like the river, is to be noted for its lack of jugs, it's just you against the nasties.

Next stop, the city gates, but mind out for the arrows and boulders as you sort out those jugs. Among the platforms of the next scene, the garden, you find some more golden jugs and this time the arrows are small fry compared to the nastie genies.

At last the Palace; more golden jugs but don't forget to duck and weave as you sort them out. After the Palace you pick up Anitra and with her in tow you're only a magic carpet's flight from home, just mind out for the arrows and those nasty birds.

'After admiring the rather 'flash' cassette case I was really looking forward to taking on The Tales of The Arabian Nights, but when I started wow was I bored! One of the first things I realised on the ship scene was that once at the top of a mast you could not go down, the instructions gave no indication of this. The graphics are reasonable and after you have passed the first screen the game develops a little. The sound could have been a great deal better, a few measly bleeps as you collect a jug but at least one is given the option to switch the sound off. This appears to present the game as good value for £5.50 but I'm not so sure'

'Not the world's most challenging arcade game this, in fact if you you can spell Arabian you should have no trouble rescuing Anitra and then she can sort out the wretched jugs'

'Arabian Nights has to be one of the most bug-ridden games I have ever played. It has a demo mode that doesn't go away, I had to break into it to actually play the game, and once you do get into it you really have to try hard to avoid the bugs. I only saw the first screen because avoiding one of the nasties means you have to walk off the edge of the ship and then you fall into the sea and disappear under the waves only to reappear at the top of the screen falling back into the sea. This continues to loop infinitely until you pull the plug as there isn't an abort option. This game has hardly any sound and fairly jerky graphics that are painful on the eyes.'

One of the most bug-ridden games I have ever played.