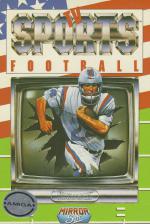 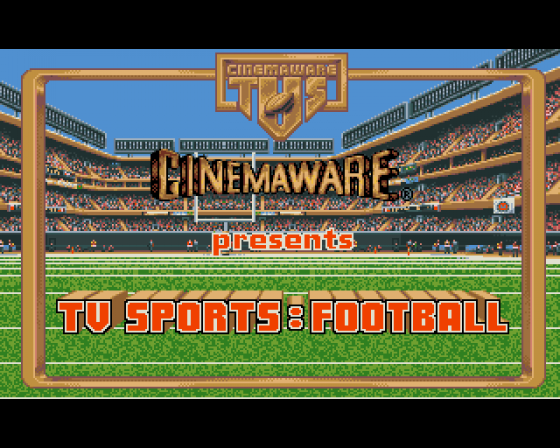 Someone once said about Grid Iron, "Football is war", and with all the heavy contact going on, this seems to be true. But there is more to this game than just running, throwing and hitting - there's loads of tactical play as well. Before we go into that, maybe we should give a quick explanation to those unfamiliar with the sport of...

The idea is to get the ball into the other team's 'endzone' (the area behind their goal line). To do this yer pigskin thingy must be moved at least ten yards in four plays (called 'downs'), otherwise possession is handed to the opposing team. 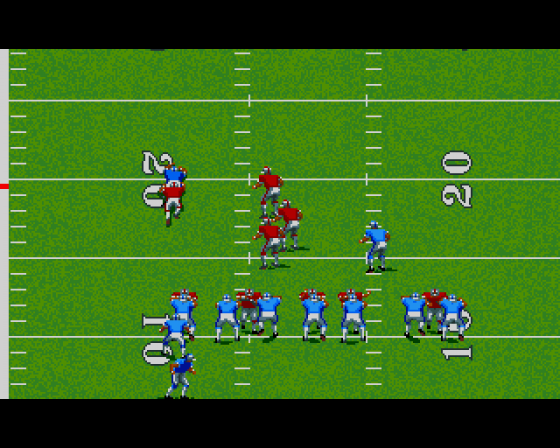 Points can be scored in four ways...

The method of scoring these points becomes very complicated, each play having its own name and code. In Cinemaware's simulation you must learn the effectiveness of these tactics and use them in the correct combination. You too can be a Head Coach!

I'm not really a great fan of American Footy, but even I can spot a game that has been brilliantly packaged and presented. TV Sports Football is such a game.

The general appearance of the game is very attractive, with some brilliant intro scenes and intermissions, such as the cheering crowd, waving players an humorous commercials.

The combinations of tactics are really comprehensive (enough to be way over my head) and I can see fans of the sport getting well stuck into the action.

As a matter of fact, even though I found it very confusing at first, I'm starting to enjoy the game - well, when Maff isn't shouting and swearing at the opposing team!

American Football is my most favourite sport, so when I saw the demo version of this my mouth didn't 'arf water! Now the finished game has arrived with all its presentation I can safely say that it's the most realistic Grid Iron simulation on the market.

There are a few annoying bits that I didn't like, such as the repeated disk swapping and some niggling technical errors, but this doesn't detract from the gameplay too much. Computer gamers who aren't especially into American Footy won't like this, because that's all it is.

Presentation 83%
Nice intermission scenes and in-game appearance but the disk swapping is a bit of a pain.

Graphics 94%
Extremely atmospheric drawings and sprites, but the animation jerks at times.

Sound 69%
Good, hard spot effects but the music is rather twee.

Hookability 78%
Difficult to figure unless you're conversant with the rules of American football.

Lastability 92%
Every game is different, giving you virtually the whole NFL to play with. 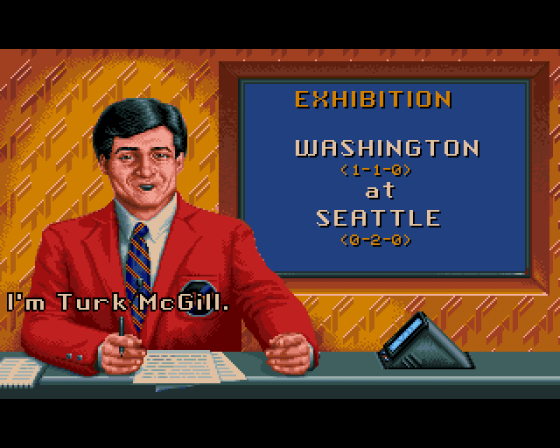