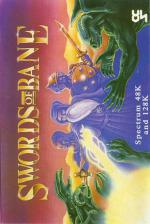 With a title that suggests that the game is going to be an adventure, CCS have taken their familiar wargame theme and transposed it into a fantasy setting. You represent various troops of the Imperial Guard situated within a valley investigating rumours of a heavy movement of monsters.

The game starts with you choosing from the various difficulty levels and then selecting your troops. These range from fireball-casting wizards - fine at long range but useless close up - to a variety of foot soldiers. Selection is by icon and what troops you pick is up to you. You have an initial amount of 'gold' with which to buy troops. As in life, what you get is what you pay for so that you can have lots of poorly equipped troops or a few heavily armed fellows.

The enemy consists of earth and water elements, demons and their leader, the Fire Demon. The monsters do not have any sort of long range weapon ability but they make up for it in other ways. Demons drain your strength and add it to theirs, water elementals regenerate on contact with water and earth elementals are just plain strong.

The game plays well but does have quite a few annoying features. There is no save facility. You cannot scroll the map to look around and find out where the monsters are coming from, and entering commands is very tedious. If you want a man to stay put for that particular turn, you must select move and then not move him. A bit of thought could have improved the presentation considerably. On the plus side though is the fact that there are two extra scenarios available on the second side of the tape - providing that you have a 128K Spectrum.

I got the feeling that CCS's hearts weren't really in this game. They produce very good wargames based on historical scenarios but fantasy doesn't really seem to be their scene and my lasting opinion is that the game is laboured.

A bit of thought could have improved the presentation considerably.