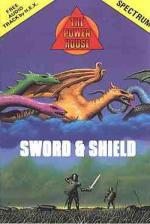 Sword & Shield is a 'real time' medieval fantasy wargame. You're the ruler over a land ravaged by rogue knights, dragons and 'masked' men. At your disposal you have your own loyal knights and infantrymen. With these you must protect the peasant farmers and their crops. Furthermore, you must balance the treasury as the seasons pass, harvests are reaped and taxes collected. The unit of currency is the 'groat' and to win you must have over 1,000.

The game is played on an impressively large map, which scrolls very rapidly. Good quality '3D' graphics depict hills, trees, farms, roads and castles. However, there seems to be a fundamental mismatch between the 'time' length of the game, which is in years, and the movement of the units, which surely must only take tens of minutes. This spoils any intended realism.

The major gripe is about the instructions. They are bad! You are not told the difference between the 'Epic' and 'Short' options at the beginning of the game. The latter makes losing nearly impossible, which is odd! Also the controls are poorly explained. Use keys 5 - 8 for moving the cursor. The other cursor keys do not always work.

Included with the game is a 'free' track by the group HEX. It's okay, but rather short and somewhat irrelevant! Altogether, good graphics, but slow and a bit aimless. Still, it's worth it at the budget price.

Good graphics, but slow and a bit aimless.