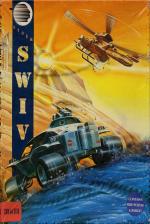 After going down a storm following their first victory against a group of mad generals, all seemed well for Hot Wheels Hoolihan, Armoured Jeep commander extraordinaire and his Helicopter Gunship buddy, Rotor Head Ralph. Together they're the Special Weapons interdiction Vehicles team and they'd just begun to take in some R and R when an alert came in. Looks like another bunch of mad generals is on the loose with secret factories producing new weapons by the ton load. So start the rotors up, Ralph, jump-start that Jeep, Hoolihan and kick some mad ass! (Nothing like a quick start to the mayhem, don't you think!)

Of course the mad generals only accept the very best in killing machinery, with helicopter gunships. Be it bouncing, bomb-dropping, missile-throwing or just plain suicidal - you name it, they're got it and it's hovering around waiting to terminate H 'N' R's tour of duty. Where would we be without a good hundred or so tanks, howitzers, flame throwers and *big* laser-firing installations thrown in as well?

And will you welcome the Mama helicopter which unloads mini-choppers by the dozen, seaplanes and some extraterrestrial guest stars too. And let's not forget the natural hazards littering the enemy's back yard alongside all those shopping trollies. Volcanoes, craters, chasms - the usual terrain that Jeeps have to be overcome with a nifty leap in the air. On the stretches of water, Hoolihan can use his aquatic arsenal by jumping into a speedy gunboat for a watery blasting session.

With this lot up against our comrades in arms, it's a good job there's shields floating around (with free smart bomb for when things get really crowded). And not forgetting the power-ups: shoot them a few times to cycle through a variety of weapon and craft upgrades.

Swiv lacks the uniqueness of Silkworm, but is still pretty impressive with both C64 and Amiga versions effortlessly filling the screen with so many enemies, bullets and explosions that it can become completely overwhelming.

It's a tough game and shoot-'em-up fanatics will need plenty of practice to beat it. The Amiga game score particularly highly because the unique continual disk-accessing means no pause in the action whatsoever, and also the graphics are on top-notch standard. The way so many baddies prepare themselves to attack is very well done; I especially like how helicopters' rotors speed up and jets taxi before take-off.

The programmers clearly have an interest in military matters, so there's plenty of neat details which keep you interested. Sadly these tiny details are much rarer on the C64, and the whole feel of the game is not quite so fresh. There are so many C64 vertical scrollers, and while Swiv is technically excellent it's graphically only okay - end-of-level monsters are particularly dull.

In truth the only truly original aspect of play is the Jeep/copter split, with effectively two layers of action being in constant play. This makes for a unique two-player game (and two ways of playing solo), so the game is still pretty good.

Despite the 'great head', I'm afraid I can't hide my disappointment with C64 Swiv. It looks just a tad too unexcitingly similar to too many other vertical scroller shoot-'em-ups. However, it is pretty damned fast, the pace is great and two-player mode works a treat with bullets moving at speeds I'd rather not remind myself about.

And this is before I mention the polished intro sequence and different high score sequences (though tape owners could have to endure some pretty hefty multi-loading based on the experience of the disk version). A shame that it starts in overfamiliar desert surroundings with more imaginative levels, such as the volcanoes, quite a long way off. C64 Swiv is good fun but isn't startlingly different from a horde of similar games.

On the Amiga there's less competition, only Battle Squadron stands is technically more impressive. Until now I've never seen a 16-bit game that comes closer to emulating the coin-op look, but this one smacks of the Tiger Heli/Twin Eagle machines with an immense rock title screen soundtrack to match.

Try as I might, I couldn't find a single flicker, an out of place sprite, a slow-down in the speed at all during play, even with all hell breaking loose as 20 bullets converged on my chopper. And as for the graphics, the attention to detail, use of militaristic colours and fun touches like the alien ship in the cornfield make it look real classy. One small niggle though: that Jeep is *still* a no-no vehicle as jumping is so fiddly to operate in the heat of battle.

And the combat can quickly hot up - I think the on-going load system works too well as there's little time to rest once it gets going. For a basic shoot-'em-up, Swiv is a stunning piece of 16-bit software, on the C64 it's not that remarkable but at least it still retains a healthy dose of playability.

Graphics 85%
Not massively original but some superb attention to detail makes it very nice to look at. Very fast with lots of enemies.

Hookability 85%
Nothing too new in concept but it plays very well with a good two-player mode.

Lastability 82%
Tough enough, plus you can play either as the Jeep or copter.

Overall 83%
Old ideas with the very latest looks and extreme playability to match.

Presentation 84%
Some intro as Amiga with better title screen. Lengthy loads, but they include two levels each and take quite a while to play through with continue-plays as well.

Graphics 79%
Good attention to detail with very little flicker and lots of bullets flying around on two levels.

Lastability 74%
Not terrifically original later levels, but a tough challenge with hundreds of helicopters to take on and the Jeep to master.

Slickly implemented, very playable shoot-'em-up fare but nothing to set the world alight.