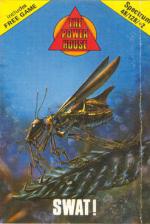 Is Alpha Omega's Swat the latest buzz on the streets or just another fly-by-night game? We'll see! It's a multi-screen maze game aimed very much at the tiny tot end of the budget market. Poor Freddy the fly is trapped in a garden which sure ain't Eden, cos everything in it is lethal to this innocent insect who has no means of defending himself. Various ugly bugs attack at every corner and even touching the poisonous leafy sides of the maze will marmalize him.

Valiant Fred has only two courses of action - he must escape from the maze, and eat the worms, strange wiggly things that appear at random. These keep Fred's bugometer topped up, otherwise its bye bye Fred, 'cos when you've only got four lives, not everything in this garden is rosy. There are two other garden mazes you can load in, adding a little more variety to Fred's frenetically brief life, though you've only got basic keyboard control - up, down, left and right is your lot.

There's so little to this game it could attain minimalist cult status. But unlikely. Let's just be kind and say it's probably okay for little 'uns, but I reckon it's not Swat big 'uns will go for!

Let's just be kind and say it's probably okay for little 'uns, but I reckon it's not Swat big 'uns will go for!