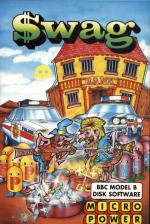 The object of this game is to steal £250,000 in diamonds. A sense of humour lies behind the creation of this game as you control your man collecting the valuables and deposit them at the bank or shop whilst avoiding the Henrys or Percys! There are Smileys which can help you and police cars which can be nuisance. Your opponent is deadly.

This game is unusual because it is a two-player game with a practice option just to get used to it. Believe me, you'll need it! However, once you've mastered the movements you need an opponent and there is no version against the computer. Just as well as it's difficult enough as it is.

The keyboard version is as good as it can be with two hands at opposite ends and there is an option to define your own control keys. Otherwise, the joystick version is preferable.

At the beginning of the game you can change some of the variables to give you an unlimited supply of bullets.

An all-action, high speed arcade game with only the one screen. Very enjoyable.

An all-action, high speed arcade game with only the one screen. Very enjoyable.