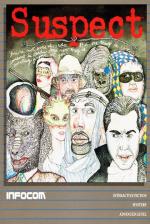 I have to confess to a secret passion for Suspect. Ever since I got hold of an early copy (running on the Apple IIe) I've been a devoted fan, and am astonished at the lack of coverage this excellent game has been given. Now at last a Commodore version has been dropped into my lap, and I feel fully justified in blowing the gaff on what must be one of the best adventures available on the C64.

It's by Infocom, and was released at about the same time as Hitch Hikers, which may explain why people didn't take much notice. Hitch Hikers might have a high market profile, but I reckon that Suspect is a better game.

The plot is ingeniously simple. As a young reporter, you attend a flash society ball given at the Ashcroft mansion. It's a fancy dress party, so you turn up dressed as a cowboy. When the game starts you're standing in the ballroom, having left your lariat in the hall cupboard.

The first few times you play all you want to do is to hang around in that ball room and marvel at the way the program copes with your inputs. There are a number of guests milling about, all in fancy dress, and you'll have your time cut out finding out who they are. You do this, of course, by talking to them, using such phrases as 'Werewolf, tell me about yourself' or 'Batman, who is the Fairy Queen'. Many of the responses you get are quite extraordinarily apt, and for the first time in my life I actually felt, when playing an adventure, that I was partaking in a real conversation.

As time goes by, however, news reaches the ballroom of a hideous murder in the study. Veronica Ashcroft has been strangled with - ooops! - your lariat! The aim of the game is to find the real culprit and prove your innocence before the law arrives and clamps you in irons.

It's a testimony to the sheer inventiveness and complexity of the program that I have no hesitation whatsoever in printing a map of it here for fellow Wizards to peruse. Even if you play the game, which you must, you'll find that the map can only help you enjoy it more. As in real life, the thrill of the event comes from the people involved, not the whereabouts of various rooms.

The map is significant however, because it's small! There aren't that many locations, but there are a dozen major characters in the game, and many minor ones besides. Some of the larger locations - the ball room, for example - are split up into sections, so that you can be in the ballroom near the bar, or in the ballroom near the band. When you're at one end of a location you can look across the room and see what's happening and who's talking to who. The degree of realism is really quite remarkable.

I shan't spoil Suspect for you by giving too much away, except to say that during the game you will find yourself indulging in all sorts of tricks and treats - from hiding behind curtains and in garages, to chatting up your host on the subject of race-horsing. This is a tremendous game, and I seriously warn you not to go anywhere near it unless you want to spend Christmas at the keyboard.

A tremendous game... You will find yourself indulging in all sorts of tricks and treats.