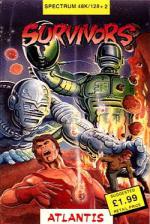 I'm a survivor so when the Ed gave me Atlantis' new offering I didn't complain, well not much anyway. I spent a couple of minutes translating the instructions from what looked like a follow-up to Star Wars into the fairly simplistic occurences on the screen, but Survivors had promise...

First you're confronted with a screen made up of a maze of walls, blocks of earth and purple boulders. In amongst that lot there are the survivors, deep in hibernation (sounds like the YS office so far). With three robots in your control - a teleporter, an octopus-like earth digger and a strong arm to move stray boulders - the idea is to clear a pathway and scoop up all the survivors with the teleporter.

And there's no need to heave a sigh of relief 'cos there's the usual sprinkling of nasties (in this case green nasties) that zap about draining power from your roving robots. Watch you don't dig earth with your brain disengaged either or you'll end up trapping one of your robots under a pile of purple boulders and if that happens you may as well give up.

At best Survivors could be described as a graphical adventure with a bit of logic thrown in. At worst, it's predictable and frustrating - there's only one way to complete some of the rooms and like many platform games starting again holds no new challenges. Not only that but the time limit of over an hour hardly keeps you on the edge of your seat.

Still, for all the criticism, it is a time consumer - whittling away a couple of hours poses no problem at all. Definitely one of the survivors.

At best, Survivors could be described as a graphical adventure with a bit of logic thrown in. At worst, it's predictable and frustrating.