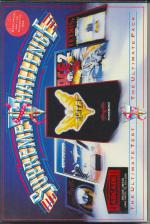 Compilations come and compilations go. But when do you see a compilation with the real creme de la creme? How often do you get four cracking good games in one package for just 13 quidlets? The price of just 65 packets of Maltesers, no less. Well, quite.

The more observant readers will now be saying to themselves, "Four ha ha ha ha! Quick, fetch some paper, I'm going to write a trainspotter letter. There are five games on this. The poor old soak's obviously had one too many at lunchtime again."

Well thanks for the character reference, but when I said four, I meant four. ACE II, though it's the sequel to the highly-thought-of ACE, really isn't in the same league as the other games on this package. Yup, we're talking GM Vauxhall Conference here, while the other four are straightforward Div 1 material. Cool? Positively sub-zero, old son.

The Sentinel was the work of Software Creations, one of those games they sad 'Could Not Be Converted' at least not onto the computerised beermat. But lo! it was indeed, and it played like a dream.

The idea is simple - well, ish. Amid a landscape of mountains and occasional plateaux, on which lie square grids, your aim is to destroy the Sentinel, which sits upon the highest peak, slowly but inexorably turning round towards you. When he catches sight of you he drains your energy and you are soon thoroughly deaded. To avoid this you must consume energy trees and transform these into boulders, which you can then stand on, and so see higher levels. You can only teleport onto squares that you can see, so the whole process is one of gradually moving higher and higher, until you consume the Sentinel himself. Fast, fascinating and unique - and like Elite, it still compares with anything else produced today.

Tetris was Mirrorsoft's big spring title, and it's a superb puzzle game, perhaps the best of its kind ever seen on the Spectrum. And, like all the best games, it's almost childishly simple.

You have a sort of grid, shaped not unlike a cup, and from the top of the cup shapes fall. Your lob is to manipulate their position, as they fall, to form lines at the bottom of the screen 'cos each completed line of shapes disappears (as well as giving you points). And for every line that disappears, there's more space in which to place the increasingly swift shapes raining down from above.

Simple, but hard, and as you get into the higher levels it gets even harder - by which I mean faster. It's tremendously addictive, especially if like me you're a puzzly sort of person, and curiously, like Sentinel, it's as good on the Speccy as on any other machine. You just can't beat simplicity.

Well, well, well, I never thought I'd play this again. I've just spent a happy two hours loading up my old data tapes and being blasted by Thargoids, even with all the wazzy shooting equipment and enough shielding to keep the Enterprise in business for about 10,000 years. They say - well, I say, actually - that Spectrum games have moved on - and they have. But Elite, all but three years old though it is, still stands out as something of a milestone. Hugely popular, vastly clever and brilliantly programmed, it seems to have everything: strategy, firepower, joystick skill, and even a cheat mode, if only I could remember it! AAAAGH!

Back in 1902 when this originally came out, this was one of YS's first megagames - in the days when things like Kokotoni Wilf got high marks. And really, it's hard not to give it a megagame now. Elite is still as playable as hell, as addictive as Ovaltine and twice as chocolatey. It's combination of space travel, commodity trading and straightforward zapping has never been equaled. If you've not got this game already - shame on you. You should buy this compilation for Elite alone. It's a classic Spectrum game, and it's been out of circulation for far too long.

This is the duffer, I'm afraid. Cascade's ACE was a splendid old flying sim, but this follow-up is too much like Ocean's ill-fated Top Gun, pitting you against another player in a graphically simplistic head-to-head of almost numbing tedium. If you really want to fly about zapping things, you would be better off loading up...

Another old Firebird hit, this, but like Elite it doesn't seem to have aged. Inspired by the planet-hugging bits of the Star Wars games, Starglider is a vector graphics shoot 'em up of rare speed and sophistication. First released about 18 months ago, it describes itself as an 'arcade quality 3D combat flight simulator' and I suppose that's about right. There's a great deal to take in, and if you have 34 fingers, it helps, but when you've mastered it, there's nothing else quite like it. Phil originally reviewed it, and eventually had to be surgically removed from the joystick, such was his pitiful descent into object addiction.

It's good apocalyptic stuff: you are in command of Noventia's last airborne Ground Attack Vehicle, with limited weaponry and fuel, and no apparent means of replenishment. So using your lasers and TV-guided missiles. you must zap everything in sight, including the flagship of the Ergon fleet, the Starglider.

Unfortunately Beau Jolly has been unable to include the novella that originally accompanied this game.. or perhaps that's not such a bad thing after all.

Yes. It's the sort of compilation that speaks for itself - a riproarer, a lipsmacker, a tasty item and no mistake. Hats off to Beau Jolly, in fact, which has proved that you don't have to be one of the big guns to put together a really useful collection of corky games. The only question it begs is, what on earth is there left to compile...?