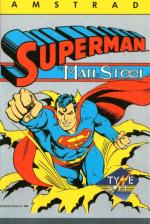 The ultimate superhero has finally made it out of that telephone booth and on to the CPC. Now the Man of Steel is ready to settle old scores with that villain to beat all villains, Lex Luthor and his evil Lexcorp. Bedecked in Red and Blue, the righter of wrongs and the protector of the weak has to complete six dangerous tasks to save the world. Can it be done? Pull those undies on outside your trousers and go up, up and away as Superman to find out.

You join the action at key points in a comic book storyline: first off you must defeat. Darkseid's Parademons who try to intercept you on the way to Metropolis. In true Supes fashion, these can be despatched with a blast from his heat vision or a solid punch. Even in the world of super powers, the old adage seems to hold true: if nothing else works, thump it!

The adventures continue in the same fashion, with Supes having to smash his way through a couple of asteroid showers liberally laced with kryptonite and death-dealing robots, break into a couple of space stations (vandal!) as well as defeat the forces of Lexcorp.

The stages are all variations of coin-op style games but with the man himself as the high powered agent of destruction. Level one is After Burner with a cape; two, Blasteroids meets Space Invaders, while the games inside the satellite stations are identical to [add horizontal scrolling shoot-'em-up of your choice - Ed]

Is it a bird? Is it a plane? On level one, it's actually hard to tell. Superman is seen from behind and only when he's climbing or diving is he distinguishable as his mighty self. The rest of the time he's no more than a red and blue kryptonian blob. In short, the graphics are passable even if Supes never does move faster than a dud bullet, never mind a speeding one.

The whole package is essentially six individual games bound together by a rather tenuous super story. As a compendium, it's good fun although tape users beware, it takes forever to multi-load - with some games (the asteroids) better than others. Fortunately, there is a built-in cheat feature which allows you to skip to the game you want, rather than having to wade through Parademons until you're blue in the face.

An annoying factor is the overly sensitive icon control for the superpowers (flight, kicking, punching, super breath and laser vision). Not only are they easily destroyed - e.g. one hit from a concussion cannon and it's finito - but they are also rather fiddly to manipulate in the heat of battle. Superman had all these talents all the time, so why is his computer cousin underpowered?

A great game for fans of the Man of Steel, but lacking in enough continuity and depth to satisfy other games players for long. Still, the boy's a long way from home so we should make the ultimate illegal alien feel at home. Besides, who's capable of telling him to clear off?

The first caped crusader is here and I must say I'm disappointed. It lacks speed and tension, and there's too much combat. Supes saves the world by using his brain and not his bicep power, but here he's little more than a krypton powered Super thug!

Grab Factor 69%
P. An instant hit with Supes fans.
N. A miss with with everyone else?

Overall 63%
If not Super, then at least Above averageman.

If not Super, then at least Above averageman.