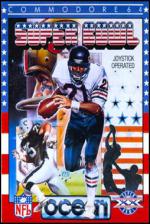 Although this is now realistically out of date, being the 'officially licensed' game of the 1985/86 Superbowl (New England Patriots vs Chicago Bears), it's still neat, combining simple strategy and arcade action to bring home the thrills of the season's most important match. Superbowl is designed for both the novice and expert, and comes with an audio cassette explaining the rules. The emphasis is on the player's ability to control the action directly via the joystick, rather than setting out the moves and watching the computer depict the ensuing results.

The action is controlled through a comprehensive series of pop-down menus with the player to be put under joystick control chosen when the move has been selected.

Now the action turns to the right, where an aerial view of the football field contains pathetic miniature dots to represent the players. A press of the Fire button 'snaps' the ball to the quarterback, and the player guides his on-screen counterpart through the hordes of opposing players. If a passing play has been selected before hand and the quarterback hasn't passed the line of scrimmage, the ball is passed by pressing the fire button. Control automatically passes to the catcher as soon as he receives the ball.

A window expands on the left hand side of the screen after ach play, replaying the entire move using three-quarter screen high characters, just like you'd see on a giant scoreboard. If you don't wish to see this, a simple press of the Fire button skips to the set-up menu.

While defending, the allocated player can either move into an intercepting position or mark an opposing player in a threatening position. Punts and kicks are executed by wiggling the joystick back and forth to increase a 'power bar', and pressing the Fire button boots the ball when enough energy has been accrued.

Superbowl is an immediately impressive program which is well designed and beautifully presented, but has one fundamental flaw - its inability to compete against a human. The computer opponent is a complete pushover for anyone more than a complete novice, and consequently the one player game becomes boring very quickly. However, as a two player game it's superb - a true arcade style head-to-head battle. Go for it if you have a human handy to challenge you.

When Superbowl came out a year ago, I was astounded by its slick presentation and ease of use. However, compared to its current competitors it's really very superficial. The lack of variation probably puts paid to any lasting satisfaction, as there are only two teams to choose from and the game screen is very simple.

The graphics are pleasing and the replay sequences still amaze me today, but the atmosphere could still have been improved - perhaps by some better sound effects. Superbowl is a good choice for newcomers, but the more hardened fanatic could be disappointed by the lack of depth.

Display 74%
The main playing screen graphics are pathetic, but are more than compensated for by the superb replay screens.

Authenticity 83%
All the razzamatazz and pomp of the occasion have been successfully captured.

Opponent 23%
Sadly, the computer opponent plays like an idiot.

Value For Money 76%
A glossy package with a favourable price tag.

Overall 80%
A brilliant two-player game, but only a novice would find the computer opponent challenging.

A brilliant two-player game, but only a novice would find the computer opponent challenging.