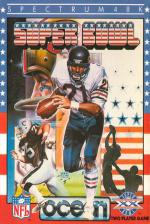 Superbowl from Ocean is a two player simulation of the supreme American Football match which pits the Chicago Bears against the Patriots. Those of you who stayed up all night to watch the entire match live on TV know that the Bears stormed home this year to a resounding victory.

Superbowl can only be played properly by two human players, although one person can practice moves and tactics by controlling both teams.

During play, the screen is split vertically into two main areas. The section on the right shows the pitch and the players marked out in their respective playing positions while the left hand area is used for the menus that to control the game's progress. A check can be kept on how much time has elapsed since the inning of play, and two 'video' screens give action replays and close-ups on particular players, just like they do on the telly!

An elaborate menu system controls all the action. Whoever is playing on the offensive side must sort out their tactics before the game can begin. The first menu shows the types of passes that can be used: long pass, short pass, rush play, and special play (which has its own little sub-menu). After the type of pass has been selected for your player to make, a further menu pops on screen and it 's time to choose which player you want to control during the next section of play and what the rest of the team is going to get up to. Using a similar menu system, the other team's defensive strategy can then be set up 3-4-4 or 4-3-4 are probably the safest to go for when playing the game for the first few times. Finally the marking scheme has to be sorted out and then the play can be made.

Hitting fire causes the players to make their moves, and the right hand display follows the action. The general idea is to move the player in possession away from the other players as rapidly as possible before the inevitable rib-crunching tackle. Once each section of the game has been completed you may be treated to an action replay, showing in slow motion on the video screen exactly what happened to your team during the previous bit of play.

'Superbowl is by far the best American Football game on the Spectrum. Ocean seem to have brought the exciting part of American Football to the fore - the man Vs man action. Other efforts on the Spectrum lost most of the atmosphere as they concentrated too much on the theory of the game - although the Argus American Football was a very good manager's eye view simulation. The graphics of Superbowl are very well done and routines for the replays are excellent. The game's market, I feel, is definitely limited, mainly because it's an American Football game but also because it is a two player only game. Superbowl missed out on all the hype before Superbowl XX and may well lose sales because of its late arrival. If you love this great American sport, then get the popcorn out, invite a few friends round and knuckle down to this very playable, superbly finished Superbowl bonanza. The audio tape that comes with it is most helpful, and a great touch'

'I'm not the world's greatest American Football fan, but I sometimes watch Channel 4 coverage, and enjoy it, so Superbowl is quite nice to play. Despite the extensive instructions and accompanying cassette, I found it pretty hard to get into, but once I started to understand it more, well, look out Bears, here I come! Seriously though, it is a very nice game to play, and the graphics, while not revolutionary, am attractive. The replay feature really adds to the game. Everything is as it should be and I think that Ocean have pushed the American Football theme to the limit by producing as realistic a simulation as is possible on the Spectrum. I like it'

'A very neat simulation indeed from the Ocean stable - it's just a pity that you have to play it with a friend to have much fun. The graphics are neat, the control system fairly easy to use once you get the hang of the game actually being played out on screen and all in, this game should find a place in any sports simulation collection. I liked it, but American Football fans will really appreciate Superbowl.'

Ocean have pushed the American Football theme to the limit by producing as realistic a simulation as is possible on the Spectrum.