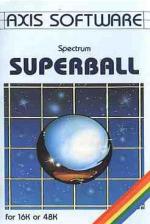 If you are a breakout addict, this is the game for you. If you aren't familiar with the game, the idea is to knock bricks out of a wall by hitting a ball with a bat.

In this version, you choose from three games: practice, progressive and acceleration. One or two people can play, and there is a choice of ball speeds.

You can even have three balls in the court at the same time - too much for me to cope with, but experienced players will no doubt be in their element.

Superball loaded first time and the instructions were easy to follow. I didn't encounter any bugs, and found the game easy to play - at very slow speeds! I would like to see Superball included on a compilation tape, along with other similar games.

I found the game easy to play - at very slow speeds!