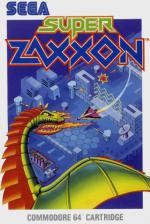 Zaxxon returns with a vengeance in the coin-op conversion of the arcade hit follow up (wotta mouthful) to Zaxxon. Superficially the difference between the two looks non-existent, but Super Zaxxon has a few different touches, including tunnels and a dragon ... more of them later.

For the new 'first time readers' who don't know what the hell Zaxxon is here's a brief summary. Just imagine a 3D Scramble (and DON'T ask what Scramble is) scrolling diagonally with your plane, a missile-firing craft flying over it. The plane behaves like a real one and is capable of climbing up and over objects, moving round them or even through and under them in true 3D style. The action takes place over the blue Zaxxon fortress, with its many hazards and deadly gun emplacements, forcefields and walls. The object of the game is to penetrate deep into the fortress and destroy the creature that appears at its heart; in the first game the Zaxxon Robot, in the sequel it's the Dragon.

When you start a game of Super Zaxxon you appear in front of the familiar Zaxxon Fortress. Climb and go through the gap in the protective wall, the fortress wall. Once that has been tackled, the hazardous first run over the Fortress begins ... destroy as many ground objects as possible, especially fuel tanks. This tops up your craft's fuel supply which is otherwise always diminishing, and fuel is essential to your survival - if you let it deplete entirely then your ship crashes.

The first run looks, and is in fact, almost identical to the original's. Littered around the colourful and detailed landscape are roads, planes, an electric forcefield, gun emplacements, missile silos (complete with launching missiles), radar dishes and fuel dumps. Occasionally a heat-seeking missile will wend its way towards you and, unless you dodge or shoot it, it will home in and bring you down.

The next stage is the second run over the fortress - even more hazardous than the first (it's almost the same as the second run in Zaxxon). Blocking your way are several forcefields stretching across the playing area and extending higher than you can fly. There is, though, a gap that you have to fly through and this is one of the trickiest parts of the game. The best tactic to use is to keep shooting until your laser blasts go through the gap, and then you can safely follow them through.

Littered over the terrain are more fuel tanks, radar dishes and missiles, but thankfully no heat seekers. If you manage to negotiate this sector then you'll move onto the final screen and meet the Zaxxon dragon. The idea is to shoot him before he opens his mouth and breathes fire all over you. If you manage, finally, to destroy him (it takes quite a few goes), then you'll go back to the start and start a more difficult run, with thinner gaps to fly through and more hostile aliens.

I was a fan of Zaxxon on the arcades, but the wait for a version on the home computer seemed ages (not being an Atari owner). Oddly, Spectrum programmers seemed more determined to do a version, although diagonal scrolling on the machine is a nightmare. So, by the time Zaxxon appeared on the C64, the game felt dated. Super Zaxxon is only a minor improvement really. The fun is still there and I find it very playable for half an hour or so, but it's nothing major and not the sort of game I would go back to frequently.

I wasn't overly impressed with the original Zaxxon on the C64 and it was with some cynicism that I loaded up this follow-up. My first impressions were that the game hadn't changed at all, only slightly in appearance. The graphics have been improved, along with the presentation, but... I then found that there are in fact a few additions to the gameplay, but nothing to make it better or any more interesting than the original. If this had been released in place of the first Zaxxon then it would have probably done better, but as it stands, Super Zaxxon is just too dated and repetitive in play to be truly worthwhile.

I thought the first Zaxxon game was highly disappointing (especially after playing the Atari 32K version), the graphics being small and fiddly, untrue 3D and the plane having no real 'feel' about it. The sequel has been slightly bettered, with higher definition landscape and improved gameplay. Even with these improvements (the arcade follow on wasn't designed as a game in itself, more of an add-on to get more mileage from it), there are a lot of similarities between the two. The two runs over the fortress are virtually identical and the final confrontation is just a souped up version of the first. The tunnel sequence is the most novel feature, but isn't that hard. I suppose if you found Zaxxon enjoyable to play or you haven't got a Zaxxon game then Super Zaxxon might be a reasonable buy, otherwise it's a bit of a waste of money. Perhaps it would've been a wiser decision to put it out as a cheapie or with Zaxxon on the other side, but as it stands it's just too expensive for such a similar game.

Presentation 78%
The same as the arcade game, with similar options.

Sound 49%
Feeb tune on the title screen and a few explosions.

Lastability 49%
... but it becomes boring to meet him time after time.

Value For Money 46%
Regarding the similarities to Zaxxon rather expensive ...

Regarding the similarities to Zaxxon, rather expensive. Still, it's better than the first one.