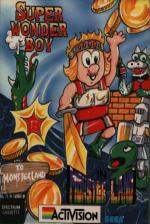 He may be up to his third adventure on the Sega Master System, but here on the ST everyone's fave sprog Tom-Tom the Wonderboy has only just recovered from his forest-foraging exploits of two years ago.

While away on his travels, Tom-Tom's homeland has been invaded by a scourge of deadly small, woodland creatures. No-one knew the reason behind this rebellion of the animal kingdom; that is, no-one knew until the Wonder Boy's return. It turns out that the animals' master, Mega the dragon, is taken aback at the indiscriminate slaughter of his furry chums at the hands of the kid with the skateboard and crash helmet, and has sent a plague of foul fauna to wipe out the inhabitants of Wonderland. And wipe them out he will, unless you take control of Tom-Tom, who has swapped his childish gear for a sword and a heart of stone, and go off in search of Meka to bring peace and justice to what is now a dangerous place to live.

Standing between Wonder Boy and the liberation of his homeland is level upon level of arcade adventuring action, a change to the hack and slay of the original game. You begin in a small town, and must fight your way through villages, grasslands and underground caverns before you stumble upon Meka and your goal. Many of the baddies you encounter have some dosh on their person, which can be collected once the creature has been biffed over the head. This money can be used in any of the multitude of shops found along the way, which sell items such as beer to increase your strength, limited buy powerful weaponry (including bombs, fireballs and lightning bolts) and armour.

Waltzing into some of the buildings brings you face to face with one of Meka's guardians, all heavily armoured and capable of ending your journey and life very quickly. These monsters must be killed, as they possess the keys to each of the end-of-level exits.

Super Wonder Boy is a fun piece of software with heavy console influences (hardly surprising - it's already been out on the Sega System). It's not the strongest licence this year by any means, but that shouldn't stop fans snapping it up.

Although the graphics are monochrome, playing is as fun on the Spectrum as it is on the ST. Worth the pennies if you like this sort of game.

This is quite fun... It's not the strongest licence this year by any means, but that shouldn't stop fans snapping it up.