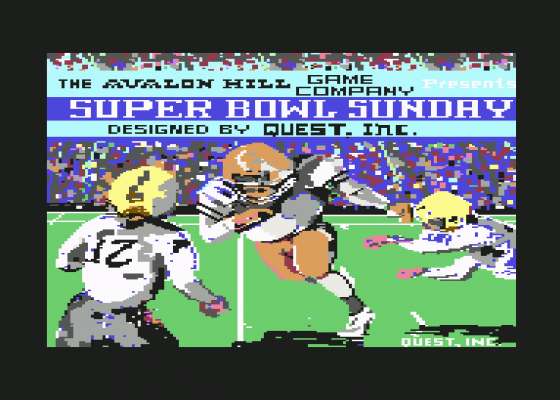 An interesting aspect of this program is that it allows any two teams which have appeared in a Superbowl final since 1966 to play against one another. Each team remains faithful to its original squad, with the players' names and their season summaries (averages, distances, completions, touchdowns, etc) accurately reproduced.

As with all of the games reviewed in this piece, there is a one or two player option. The former pits the player against an 'intelligent' computer-controlled team, which in this case proved to be of considerable talent. Fixtures are contested over 20, 35 or 45 minutes of real-time action, with the match beginning when this selection has been made.

A comprehensive status display includes the current time, quarter, down, yardage, ball position and the result of the last play. Although detailed, the list is very straightforward with the current situation always accessible at a glance. 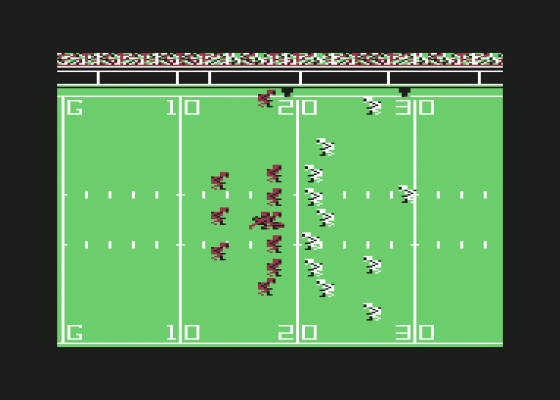 Pressing any key brings the action screen into view, with a list of eleven offensive moves displayed - three sneaks, four rushes and three passes. The next necessary choice is the scrimmage formation selection. There are three variations: pro-set, three backs or four receivers, one of which is chosen to complement the particular play. A quarterback and runner/receiver are then selected to complete the line-up.

A similar series of options is used to define the defensive movement. The initial selection is between one of three basic defence patterns: run, pass or normal. These are followed by twelve specialised defence set-ups, with play beginning when all options have been chosen.

The action is displayed television-style, with the sprites moving convincingly and responding perfectly to your commands. Occasional human errors including fumbles, interceptions, fouls and injuries further enhance the feeling of 'being there'. 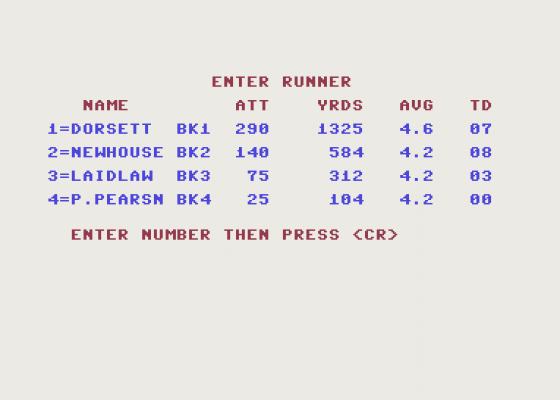 One of Super Sunday's most appealing factors is the selection process' speed. There's no waiting for the program to think or slowly print up a screen - the player simply makes a selection and passes on to the next options sheet at whatever speed he or she sees fit. The options are basically simple, but incredibly versatile, allowing the player plenty of choice and scope.

The instructions are excellent, fully explaining the program's thoughtfully designed and beautifully presented workings. Add this and the superlative gameplay to the fact that there are forty teams of different capabilities (giving a total of 400 different games), and you end up with something very near the American dream (the football enthusiasts' variety, that is).

Super Sunday is one of the easiest American football games to use, yet, despite its simplistic structure, it contains every single element of the game. You take part in every single play, with the outcome always dependent on your choice - not on a random computer-generated element. 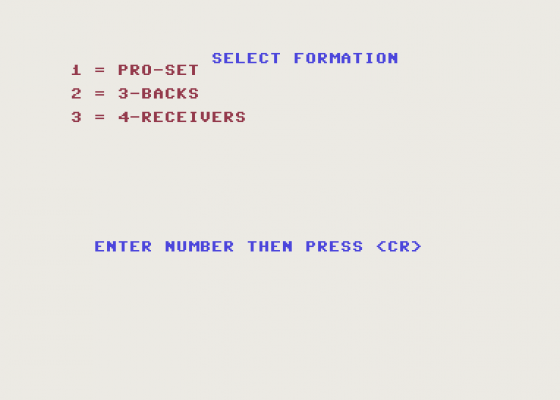 The computer provides a worthy opponent, even attempting a field goal when there aren't enough seconds left for a successful drive!

Realistic graphics have never really been achieved successfully in an American football program, but Super Sunday gives you well animated graphics and a decent smattering of colour.

Quite simply, this is the most realistic and atmospheric American football game on the C64 so far. 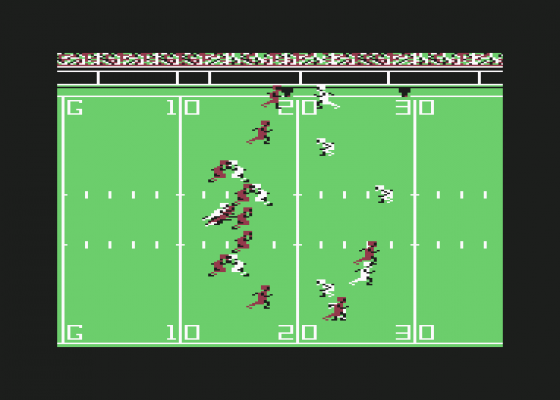 Presentation 95%
User-friendly and includes all of the game's many aspects.

Display 82%
Very convincing. A little on the thin side, but successful in generating all the excitement of an American football game.

Playability 93%
A joy to play, combining depth and simplicity perfectly.

Authenticity 96%
Oodles of correct facts and figures, 40 authentic teams and gameplay which strictly adheres to the rules.

Opponent 92%
Plenty of score and variety, with the computer having the ability to play any of forty teams.

Value For Money 88%
An essential and worthy buy for any American football fan.

Overall 92%
A superlative product - the best football simulation on the market.

A superlative product - the best football simulation on the market. 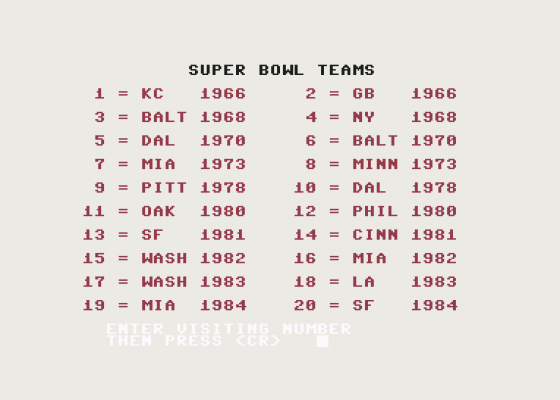 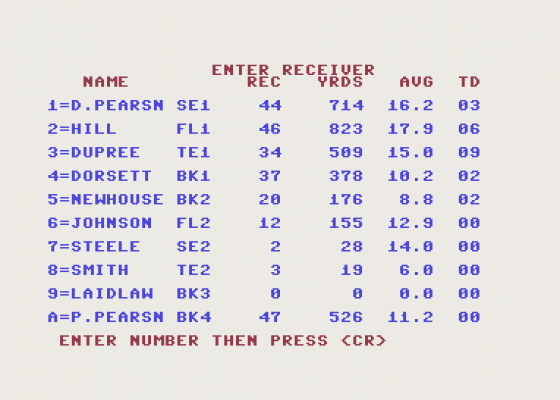 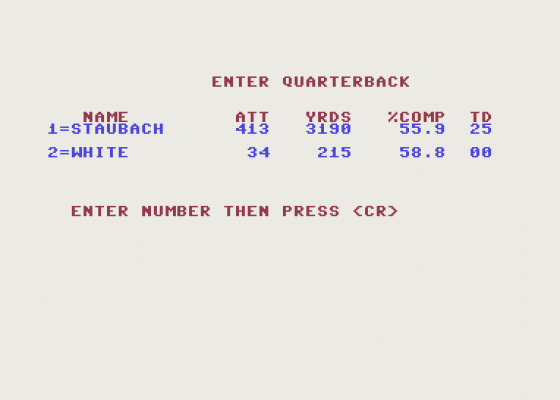 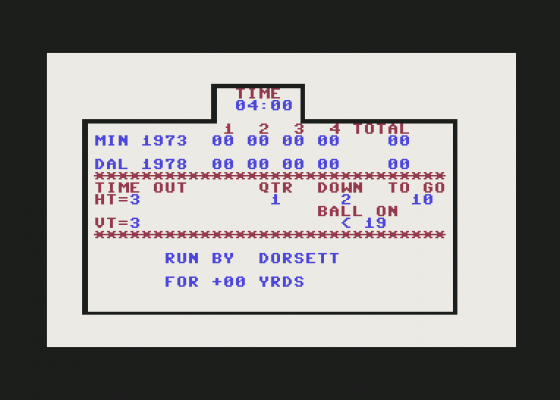 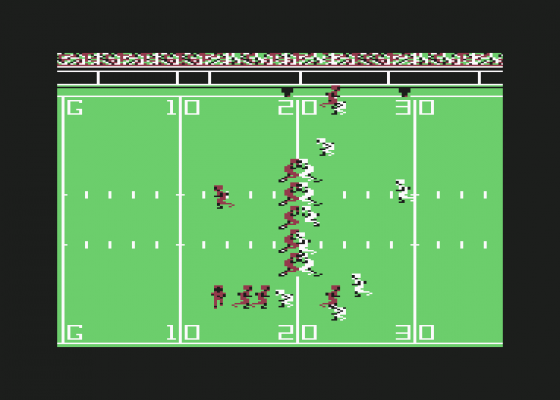