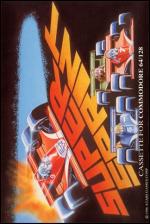 The popular Atari two-player racing game has, at last, arrived on the Commodore 64, courtesy of Electric Dreams.

At the start, a one or two player game is chosen. The former pits a solo driver against two computer controlled 'drone' cars, while the latter is a head-to-head race, with the option to include a drone opponent.

Four circuits are available, each viewed from above and littered with hazards such as tornadoes and oil slicks (causing the cars to spin out of control), and water puddles (which slow the cars down). When racing round the track, the players have to use ramps to jump gaps in the circuit, negotiate moving gates and take short cuts in an attempt to finish first.

Colliding with the side barriers at a slow speed stops the car temporarily, while high speed smashes require a replacement car, flown in by a helicopter.

Bonus spanners appear regularly, and are automatically collected when driven over. Collect three and an extra feature is added to the car, either super-traction, turbo acceleration, higher top speed or increased scoring.

If the drone car finishes first, the game ends. Otherwise, the track selection screen reappears, with any completed circuits bearing a flag in the appropriate winner's colours. When all four tracks have been completed, a fresh set are loaded in for the competition to continue.

I love the original - it's really competitive and playable. The Commodore 64 looks very similar, but unfortunately frequent bugs ruin the enjoyment.

Yes, Super Sprint is badly bugged - something you don't expect to find in a full priced game. Sometimes the helicopter freezes before it drops a new car on the track (effectively ending the game), and at other times cars glitch terribly, exploding or disappearing and reappearing on another section of the track!

Super Sprint could have been brilliant, but it's fallen far short of its potential.

Okay, so the arcade version is the bees' knees, but this version is just awful. Graphically, the game is tremendous: all of the tracks are beautifully presented, and the cars are small and neat. The control is a little slow to react, but bearable. So, what's the matter with it?

In a word - bugs, and plenty of them. Cars can be driven off ramps onto the track below, players who haven't collected any spanners are allowed to customise their cars and at one point, both cars exploded, the helicopter froze about the track and the drone car, oblivious to all the excitement, went on to win the race!

If only Super Sprint had been properly playtested...! It could have been great.

Presentation 72%
Clear and concise instructions with faithful presentation on screen.

Sound 31%
The grating soundtrack repeats every ten seconds, and the effects are similarly forgettable.

Hookability 61%
Easy to get into, but bugs swiftly mar the enjoyment.

Lastability 45%
The two player option is fun, if you can stand the bugs!

Graphically, the game is tremendous... It could have been brilliant, but it's fallen far short of its potential.